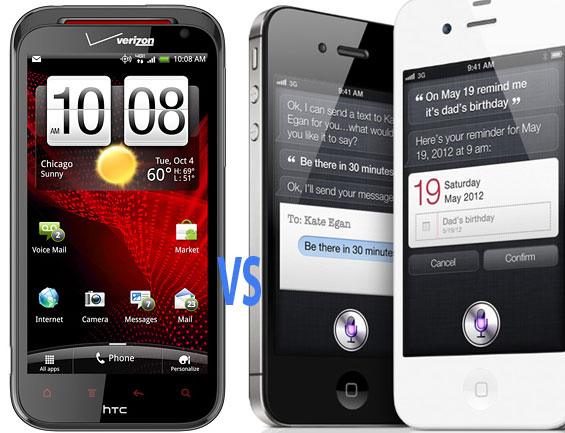 The iPhone 4S came out just recently, and while it was not the next revolutionary iPhone 5 that most fans were expecting (especially after so much time without an update), it is a decent smartphone. But decent doesn’t really cut it nowadays, and if you want to stay in the business on the mobile market, you need to bring out the best you’ve got. This didn’t really apply to Apple until recently, but it’s starting to catch up with their iDevices, too.

It’s almost unfair to compare the iPhone 4S with the latest and greatest in Android smartphones, but being that it’s the most advanced smartphone from the company that revolutionized the market a couple of years back, we can’t help but do it. So, let’s see how the iPhone 4S stands against HTC’s latest monster, the Android-powered Rezound.

The iPhone 4S looks pretty great, even though the design is over a year old (an eternity in the tech world nowadays!), with its metal frame sandwiched between two pieces of sturdy glass – I’m sure you have a photographic memory of it inside your head already :-). Still, the HTC Rezound manages to be equally as impressive, which is kind of rare for HTC – they’re usually the “practical design, powerful hardware” company, unlike Motorola and Samsung. The Rezound is all black with red accents (thanks to the Beats by Dr. Dre deal), making it look aggressive and pretty cool – and equally suitable both for youngsters and business people.

The iPhone 4S has the same old 3.5 inch, 960×640 pixels display, which is still very hard to compete with quality wise. However, Samsung and Motorola already outcompeted it with their Super AMOLEDs, and now HTC seems to have caught up, as well – the Rezound uses a beautiful 4.3 inch, 1280×720 pixels screen that looks just as good as the iPhone’s and fits more content, at the same time.

While the dual core 1 GHz A5 processor inside the iPhone 4S is reasonably powerful and should hold up to any tasks, it’s nowhere near as future proof or fast as the new 1.5 GHz dual core Snapdragon in the Rezound – and the Adreno 220 graphics adapter makes it even better in games and 3D apps, as well. Of course, there’s the 1 GB of RAM to back it up, which is better than the 512 MB in the iPhone 4S in multitasking and resource intensive apps – and there seems to be more and more of them every day.

The Rezound may have only 16 GB of onboard storage space, but it makes up for that with a micro SD card slot that can be used for adding up to 32 GB more, which is still cheaper than buying the 64 GB model of the iPhone. Apple has certainly improved the camera in the iPhone 4S, but the Rezound also packs a new 8 megapixel shooter with support for 1080p video recording and better shooting in low light conditions, so they’re pretty even. The camera on the front is better on the Rezound, since it’s a 2 megapixels model – the iPhone 4S only has a VGA camera suitable for video calls (and even then, the quality is a bit bad on the beautiful high-res screen). The other specs are pretty much the same, with the exception of the 4G LTE radio on the Rezound – iPhone 4S owners finally got the 14.4 Mbps HSDPA support, though.

Android 2.3 Gingerbread is already a worthy opponent and in many regards a better operating system than iOS, but the upcoming Ice Cream Sandwich (which the Rezound will receive via an OTA update) will blow both out of the water – with over 200 improvements, including a new interface, Face Unlock feature, Android Beam, and other features, it will finally propel Android to the first place in the mobile OS race. iOS looks pretty simple by comparison, but it can still run everything you might need to, so it’ll hold out for quite a while, I suppose.

Overall, the iPhone 4S lags behind the competition, with most of the similarly priced Android handsets being faster, with more features and better looking, too. The Rezound is an excellent example and a great choice for those who want a bigger screen or an alternative to the iPhone. But if you’re strictly in the Apple camp, waiting for the iPhone 5 (which is supposed to be here in several months) may be worthwhile.