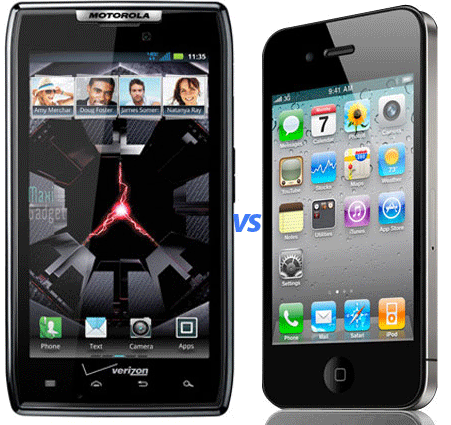 Apple has released their new flagship smartphone, the iPhone 4S, just recently, and to everyone’s surprise, after a year of waiting, they just pulled an iPhone 3GS move instead of releasing the next best device on the market. Still, the iPhone 4S is selling surprisingly well, with millions of people buying it off the bat, so I guess they’re doing something right.

On the other side of the OS pond, Google has just announced the Galaxy Nexus, which will be running the all new Android 4.0 Ice Cream Sandwich and is generally regarded as the flagship Android smartphone because of that. However, despite everyone expecting it to be the best Android smartphone yet, it really isn’t – beyond the HD display, the only thing that’s unique about it is the new OS. You know what phone can really be called the next Android flagship? Motorola Droid RAZR.

Yes, the newly revealed smartphone kind of took everyone by surprise, especially with its specs. It’s slim, it’s durable, it’s powerful, it has a beautiful Super AMOLED display and all the features you can think of and it costs less than the Galaxy S2 – if they would just add Android 4.0, it would be an instant hit (of course, an upgrade is coming anyway, but you’ll have to make due with Gingerbread for a few months).

And of course, most people started comparing it to the iPhone 4S practically right away. So how do they compare?

Well, I’d say that the Droid RAZR wins on all accounts except size – it’s just overly long and wide, even though it’s the thinnest smartphone on the market at only 7.1mm (that actually helps it feel great in your hand) – it really deserves the RAZR name, and there’s nothing quite like holding it in your hand. The iPhone 4S has a more normal size, but its screen can’t compare to the 4.3 inch Super AMOLED in terms of comfort. The resolution on the Droid RAZR is also qHD 960×540 pixels, which makes everything even better – if you’ve seen the Galaxy S display, then you know how the RAZR’s looks.

While the iPhone 4S is pretty fast with its 1 GHz dual core A5 processor, the Droid RAZR beats it with a 1.2 GHz TI OMAP 4460, one of the fastest platforms on the market, and its 1GB of RAM is twice the amount found on the 4S, so multitasking performance will be better, especially with Ice Cream Sandwich.

The other hardware specs are pretty much the same on both phones, however in addition to the GPS, Bluetooth, Wifi, the 8 megapixels cameras on the back and front facing ones, the Droid RAZR also has support for Glonass (for Russian citizens), a separate micro HDMI port, DLNA, a micro SD card slot (in addition to the 16 GB of onboard memory) and a 4G LTE radio – Apple really got lazy on that last one, as Motorola managed to fit it in such a slim body. The battery life should also be equal on both smartphones, even though the Droid RAZR has a bigger screen and 4G LTE radio, thanks to Motorola’s huge 1780 mAh battery that somehow fit under the hood. Worth mentioning is the Kevlar back cover on the Droid RAZR, which looks pretty unique and also makes the phone more durable.

The Droid RAZR is really amazing, and you should definitely think twice or three times before going with the iPhone 4S instead of it, especially since the retail price will be only $650 for an unlocked unit – that’s cheaper than Apple’s new flagship!