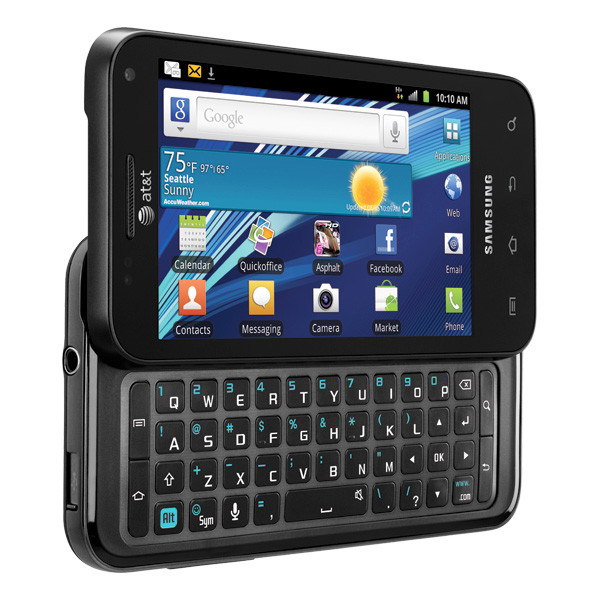 Samsung has had quite the successful year in 2011 – they’ve been able to get their hands into pretty much all of the important tech markets out there, and they’re pretty good at it, too. They’re producing the best TV displays, fastest RAM memory, most reliable SSD drives, some very impressive laptops and tablets and of course, some of the most popular smartphones, as well.

Their Galaxy S and Galaxy S2 smartphones (I mean all the variants around the world, of course) are responsible for half the sales of Android smartphones alone, and networks from around the world just keep getting more and more contracts with them. One of the latest custom Galaxy S2’s to see the light is the Samsung Captivate Glide, which will be coming to AT&T and is practically a dream come true for many people – a Galaxy S2 with a landscape QWERTY keyboard!

As you may have noticed, AT&T is pulling exactly the same move as Sprint did with the Samsung Epic 4G, which was basically a Galaxy S with a QWERTY keyboard, and a pretty good one at that. The new Captivate Glide looks pretty much like the vanilla Galaxy S2 when closed, with the difference being in the 4 touch buttons below the display (the GS2 has three, differently styled), and of course the thickness of the device – the keyboard does add some mm, after all. The back cover now doesn’t have the lip at the bottom, either, but the textured finish makes it pretty easy to hold anyway.

The display used on the Captivate Glide is a 4 inch Super AMOLED unit, with the usual resolution of 800×480 pixels. The Super AMOLED Plus would’ve been really nice, but the previous generation screen looks great, as well – colors are vivid, brightness is very high and everything on the display is visible enough in sunlight. The processor used is a Tegra 2 dual core running at 1 GHz, with 1 GB of RAM to back it up – sure, it’s not 1.2 GHz or more, but two cores more than make up for that.

There are 8 GB of inbuilt storage space, and thankfully, a micro SD card slot – it would’ve been a total deal breaker if it was missing, but as it is, you can add up to 32 GB more, bringing the total space available for your files to 40 GB. The cameras are pretty much the same as on the original Galaxy S2 – there’s an 8 megapixels unit on the back with LED flash and support for HD video recording and a 1.3 megapixels one on the front for video calls and chat.

Other hardware specs include the usual Wifi, Bluetooth and GPS adapters, an accelerometer, magnetometer, gyroscope, proximity and light sensors, a 3.5 mm audio out jack, USB port, as well as a HDMI out port – practically everything you’ll ever need on a smartphone. The QWERTY keyboard is frankly not as good as others on the market (for example, the Droid 3’s), but it does the job pretty well. There is enough space between the keys to make typing comfortable, but with the keys being flat, it’s a bit hard to actually know when you’ve pressed one of them.

As is the case with all the new smartphones except the Galaxy Nexus, the Samsung Captivate Glide comes with Android 2.3.5 pre-installed, and will be getting an upgrade to Ice Cream Sandwich soon enough. Samsung also installed their favorite skin, Touch Wiz 4.0, which you can love or hate or completely disable, thankfully :-). More than likely, the phone will be open for custom ROMs, making it the perfect QWERTY-equipped candidate for CyanogenMod and other custom ROMs, which is great news for all the developers and hackers out there.

Overall, the Samsung Captivate Glide is a great addition to the list of Android smartphones – having the Galaxy S2 with a QWERTY keyboard is pretty awesome, and if you need a good phone for everyday work or even entertainment, you should definitely check it out.