Trending
You are at:Home»Gadget Reviews»Acer A200 – a future budget tablet with today’s top of the line specs
By Gadgetman on Dec 5, 2011 · Gadget Reviews 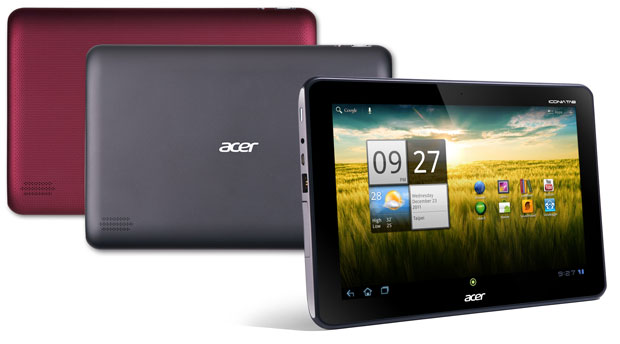 Acer seems to be pretty successful on the mobile market, with their W4 smartphone already being picked up by several networks around the world and the A100 and A500 tablets, the latter being pretty popular with those who want an affordable, yet powerful 10 inch slate to do all their work on.

While they have started off pretty slowly and late in the game (with almost a year passing between the announcement of their tablets and their actual release), they’ve picked up their pace and just recently, they announced that they will be releasing a new budget tablet, the Iconia Tab A200, with some pretty good specs… for today’s slates. Whether that’s good or bad depends on when the A200 will actually come to the market, but assuming it’s not going to be at the end of the world 2012, I’m pretty sure it will be considered very powerful for the price.

The still shots released and the video show that the A200 will have a normal looking design, with a plastic back cover and 10 inch display on the front. The device will be 12.4mm thick and 720 grams light, and while that’s definitely not top of the line, it’s good for overall durability and the ability to fit in a full-sized USB port (let’s hope it will work out better than Toshiba’s first Thrive). The display’s 1280×800 pixels resolution is nothing to marvel at, but the IPS technology will make the colors, contrast, brightness and the viewing angles very good, which is all that we need to enjoy a good tablet experience.

The performance will be provided by the good old Tegra 2, which is still near the top of benchmark charts, especially with its updated 1.2 GHz processor cores and the still-extremely-powerful GeForce graphics adapter. 1 GB of RAM will also ensure that multitasking and especially demanding apps will run smoothly and without issues, while the integrated 8 or 16 GB of storage space (depends on the model) and the micro SD card slot will leave you plenty of room for all your files, including music and movies.

Other confirmed specs include the above mentioned full sized USB port, which can be used for connecting external peripherals such as a keyboard, mouse, various adapters, external hard drives and flash drives and 3G modems (there is no 3G connectivity in the tablet, by the way). Sadly, there will be no rear camera, but the slate will have a front facing 2 megapixels snapper for video calls and snapshots. Obviously, there’s the usual Wifi, Bluetooth, GPS, audio out jack and the various sensors needed for everyday tasks and apps.

Although the A200 will be shipping with Android 3.2 Honeycomb (which practically makes it official that it will be released in the following couple of months), Acer has already confirmed that an Ice Cream Sandwich update will be available as an OTA (Over The Air) update, so you’ve got nothing to worry about software-wise. The custom skin that Acer uses is also pretty good, and the updated version is expected to be better.

The pricing hasn’t yet been announced, although rumors are that it will cost under $250 – if that is the case, it will make one heck of a good purchase (although there will be some competition when the tablet actually gets released, no doubt).