Trending
You are at:Home»Gadget Reviews»Dell Streak 5 vs Acer Iconia Smart – has Acer learned from Dell’s mistakes
By Gadgetman on Dec 28, 2011 · Gadget Reviews 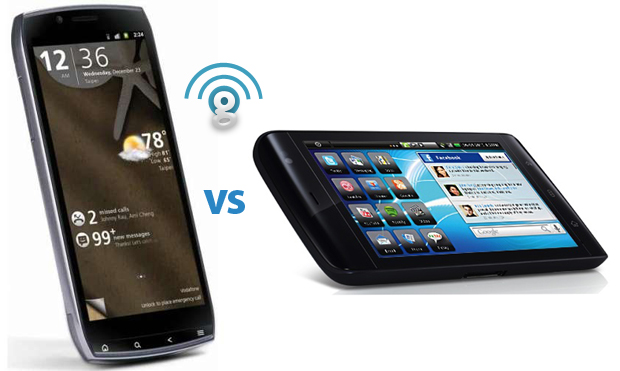 Of all the smartphones released in the past two years, the Dell Streak easily stands out, with a lot of people loving it and a lot of people not seeing the point of an oversized smartphone that doesn’t fit your pockets.

Even though it was a failure (for more reasons than just the size), other manufacturers seem to have caught on to the idea and are continuing the legacy – Samsung has released the Galaxy Note, HTC has the Titan and Acer has probably the best of oversized phones, the Iconia Smart. So, what did Acer learn from Dell’s mistake and implemented in their own phone/tablet hybrid?

I’d say that the Iconia Smart looks better than its inspiration, with a more elegant design, although it’s still a slab smartphone at the end of the day. The front has the 4.8 inch display and 4 Android navigation buttons, which is the same on the Dell Streak. Thanks to the wide and slightly smaller screen, though, the device is not as wide, which means that it will fit better in one or two hands, plus some wider pockets.

The display on the Streak was a 5.0 inch monster, with an 800×480 pixels resolution that made everything look pretty pixelated. The Iconia Smart will be sporting a 4.8 inch touch screen with a 1024×600 resolution – much higher DPI, which will make the picture better.

The Dell Streak used a single core Snapdragon running at 1 GHz, and with 512 MB of RAM it was pretty fast at the time, but it quickly went downhill in benchmarks with the introduction of dual cores and faster single cores. The Iconia Smart also debuted with a 1 GHz second generation Snapdragon, which is slightly faster but still not up to par with Tegra 2 for example. As the phone will be released in 2012, we’re expecting it to come with a dual core processor, although that may not happen after all. The phone has the same 512 MB of RAM, which is a bit low for a modern phone, especially a media and entertainment device with a big display.

Overall, the other hardware specs are pretty much the same on both phones – both have Wifi, Bluetooth, GPS, a lot of sensors, but the Iconia Smart will support 4G networks, as well as have better cameras on the front and back – 2 megapixels and 8 megapixels, respectively, compared to 0.3 and 5 megapixels on the Streak. The storage space will be provided by the user with a micro SD card – the same as on the Streak.

The software part was the Streak’s downfall – it launched with Android 1.5, which was hopelessly outdated at the time, and the updates rolled in too slowly, making users angry and the device pretty useless for what it was intended for (the stock browser was not up to the task, video could not play back properly and most newer games did not work at all, for example).

Acer was planning on shipping the Iconia Smart with Android 2.3 Gingerbread, and it will probably update that to Ice Cream Sandwich if it waits another few months, so everything seems alright with their software (especially if they use their proprietary customizations, which are pretty cool).
It seems that Acer did not learn much from the Streak, but I suppose they learned enough to make the Iconia Smart a bit more popular and not a failure from the get go. The Galaxy Note is a better phone in this niche, though, unless Acer adds a dual core and Android ICS when it finally released their hybrid.