Trending
You are at:Home»Gadget Reviews»iPad 2 vs Xyboard 10.1 – how does the successor to the Xoom stack up against the leader?
By Gadgetman on Dec 31, 2011 · Gadget Reviews 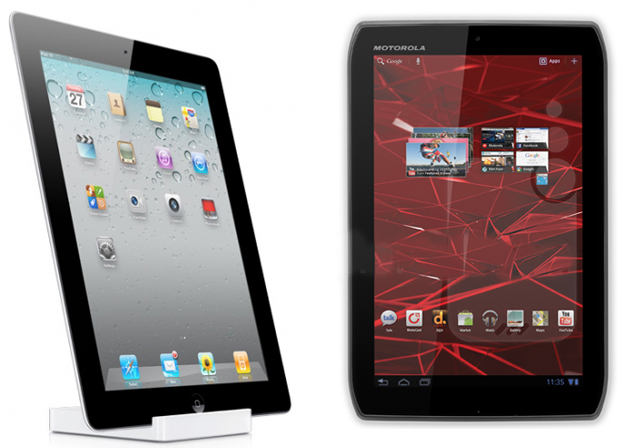 The iPad 2 was released quite a while ago, and it brought quite a few noticeable improvements over the first iPad, with the most important additions being the two cameras, dual core processor and double the amount of RAM. But the real purpose of the tablet was to bring Apple’s offer up to date with the competition – at the time, most manufacturers already had a dual core tablet on sale or in the works, and Apple was only competing with the single core iPad, which lacked a lot of the features that the competitors had, as well.

At the time, the iPad 2 was touted by users as the answer to the Motorola Xoom – the first dual core tablet running Android 3.0 Honeycomb, and although it sold much worse than the iPad 2, the comparison was pretty fair. And now, we’ve got the successor to the Xoom, the Xyboard 10.1, on the market, so it’s interesting to see how the iPad 2, which barely matched the Xoom specs-wise, compares to its successor.

The iPad 2 has pretty much the same design as its predecessor – that is, classy, elegant and durable, with an aluminum unibody design, big sheet of Gorilla glass on the front and a very slim profile at only 8.8mm, which makes it look and feel impressive, especially with its 600 grams weight – almost feather light for a 10 inch device.

The Xoom leaved a lot to be desired in the exterior design department, and Motorola didn’t fail to deliver – the new Xyboard 10.1 has a much more attractive design than its predecessor, bringing it on par with the iPad 2, but taking it in a different direction – instead of being a fashion statement, the Xyboard 10.1 is more practical – it weighs 600 grams, is 8.8mm thick (the same as the iPad 2), but the back is made out of plastic with rubber inserts around the frame to make the tablet easy to hold and work with in most conditions. The display is also covered with a big sheet of Gorilla glass, which means it’s also scratch resistant (although not scratch-proof).

The displays are comparable on both tablets – with the exception of the format (the iPad 2 uses a 4:3 format, while the Xyboard 10.1 is 16:10 widescreen) and the resolution (1024×768 and 1280×800, respectively), all the other characteristics are pretty similar – the color reproduction, brightness, contrast, all are comparable. The Xyboard’s higher resolution means that it can fit more text or pictures on screen, but the difference isn’t that big.

Overall, the hardware features of both tablets are pretty similar, with the glaring exception of the cameras – the iPad 2 has a 0.3 megapixels unit on the front and a 0.7 megapixels one on the back, which frankly is not enough for good photos, although it can shoot 720p HD video. The Xyboard 10.1 features a more impressive set, by comparison – a 1.3 megapixels camera on the front and a 5 megapixels snapper on the back. The cellular radio also supports 4G LTE networks on the Xyboard, so the device is more future proof.

The other hardware specs include the usual Wifi, Bluetooth and GPS adapters, a bunch of sensors, a 3.5 mm audio jack, HDMI out, and the option of 32 or 64 GB of storage space with no possibility of expansion (obviously, the iPad 2 also has the non-3G and 16 GB versions, as well).

Performance wise, both tablets are about equal, although the Xyboard 10.1 will fare better in multitasking and more intensive apps, and with the new Android 4.0 update coming to it in the following months, that’s a good thing. Both tablets use a dual core chipset, with the TI OMAP in the Xyboard running at 1.2 GHz, and the A5 in the iPad 2 being clocked at 1 GHz. The Xyboard has 1024 MB of RAM, while the iPad 2 has only 512 MB, and that makes all the difference when running multiple apps at the same time.

The differences between iOS and Android are pretty big, but the hundreds of thousands of apps on the marketplace make them mostly equal. Even though Ice Cream Sandwich will be coming to the Xyboard next year, the next version of iOS will more than likely match it in features and capabilities, just like it always has. That said, the Android home screen and interface sure is a refreshing sight after the same rounded icons and gray colors on the iPad – that interface hasn’t changed much since like 2007, and while that’s fine with new users, it gets a bit old to those who are constantly upgrading their Apple devices.

Overall, I’d say that the Xyboard 10.1 is a perfect match for the iPad 2, and is pretty much equal or better in regards of design, ergonomics, software and hardware power. If you had to choose between them, it would be pretty hard, but to make it simple: the Xyboard would be better for those who want to get the most out of their investment, use their tablet every day for work and entertainment and customize the OS, while the iPad 2 is a better choice for those who buy a tablet for the first time and want it to be simple to use yet powerful enough to last for several years.