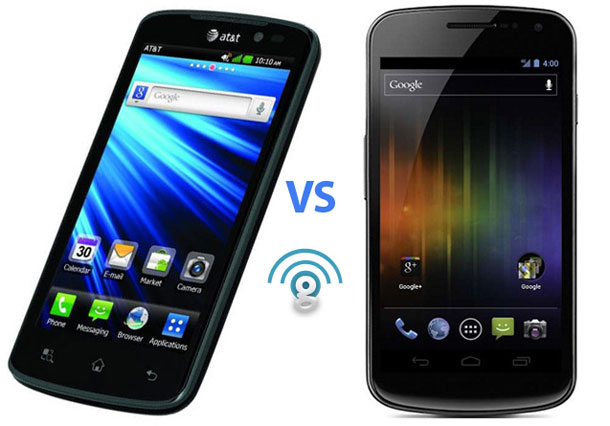 The latest batch of smartphones have quite an impressive spec sheet, and by popular recognition, the Galaxy Nexus from Google and Samsung seems to be the most popular model, although it’s mostly because of the preloaded Android 4.0 Ice Cream Sandwich OS. If you don’t mind waiting for an OTA update, there are other great flagship phones, and it seems that each month we get a new one, with the December release being the LG Nitro HD on AT&T’s network – a very impressive smartphone that can easily take on the Galaxy Nexus – but which one should you choose?

The design of both devices is very similar, although the Nexus looks a bit more sleek thanks to its lack of external navigation buttons (which also takes care of the accidental touching issue), and the slightly curved housing, which looked great on the Nexus S and continues the tradition on the Galaxy Nexus, as well. The Nitro HD isn’t ugly, either, with its slim design, big screen and textured back cover – in the end, it’s a matter of taste which one you choose.

The display is one of the most attractive parts on both phones – they both feature a 1280×720 pixels resolution, although the DPI is just a bit higher on the Nitro HD due to its 4.5 inches size, as opposed to the 4.65 inches on the Galaxy Nexus. That isn’t really noticeable, though. The technology of the displays is different – while the Galaxy NexuS uses the good old Super AMOLED matrix, which still looks amazing and is great for the battery and outdoors visibility, LG opted for their own IPS technology, which provides great viewing angles, more natural colors (less saturated), good brightness, but slightly worse black levels and visibility in direct sunlight (it’s LCD, after all). The choice may not be as easy as it seems – you can compare the current G2X and the Galaxy S, for example, to see the advantages and disadvantages of both technologies.

Overall, the hardware features of the LG Nitro HD and Samsung Galaxy Nexus are very similar, but there are a few differences that really make it harder to choose between the two phones. First of all, the Nitro HD has a faster 1.5 GHz dual core processor, compared to the 1.2 GHz TI OMAP in the Galaxy Nexus, so it will be just a tad bit faster under full load. The amount of RAM is the same at 1024 MB, so most of the times, you’ll see no difference between the phones.

The storage space on the Galaxy Nexus is limited to the internal 32 GB, while the Nitro HD has only 4 GB onboard and a micro SD card slot – there’s a 16 GB card in the box, as well, but you’ll have to spend more money if you want to get 32+ GB in the future. Another difference is of course the lack of a 4G LTE radio in the Galaxy Nexus, but really 21 Mbps 4G should be more than enough for most tasks, and the battery life suffers significantly with an active LTE radio, being reduced by up to 30-40% in some cases. The camera is bigger on the LG, an 8 megapixels unit, compared to the 5 megapixels on the Samsung, but the latter has an NFC sensor, so you’ll have to choose wisely.

The other features are pretty much the same – Wifi, Bluetooth, GPS, HDMI out, an assortment of sensors, a front facing 1.3 megapixels camera – all of it is present and accounted for.

As I already mentioned, the Galaxy Nexus will be shipping with Android 4.0 Ice Cream Sandwich pre-installed, and the new OS brings quite a few improvements over the previous version. However, it is a fact that the LG Nitro HD will get an update, as well, in the following months, at which point there will be little difference between the two phones software-wise. The custom skins used by Samsung and LG are both pretty good, but you can always remove them if you want a vanilla Android experience.

I don’t envy you if you have to choose between the LG Nitro HD or the Galaxy Nexus – both of these smartphones have their own good and bad points, with the main differences being in the display technology, design, processor and initial software. In my opinion, the Galaxy Nexus is better, though – it costs quite a lot less, comes with an unlimited data package (although the Nitro HD will probably have one, too), and the battery time is better, even though the performance is slightly lower.