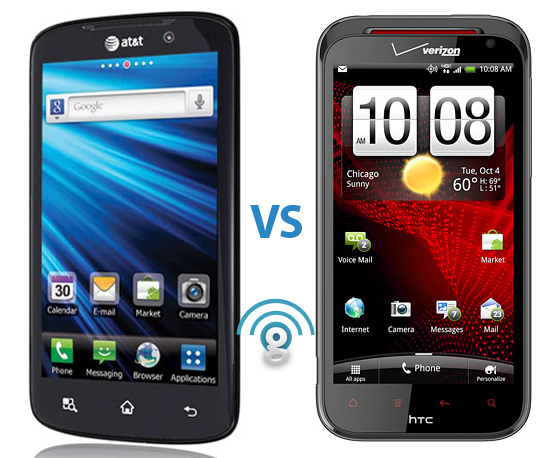 The high end niche of the Android smartphones market sure isn’t lacking selection – there are already half a dozen models to choose from and new ones are being announced practically every couple of weeks. Even the low end niche doesn’t have as many phones!

If you want to get one of the most powerful smartphones to last you several years and more (beyond the contract), Christmas is the perfect time to do it – you can get yourself or your family and relatives a nice present, and the prices are discounted for the duration of the holidays, as well. And if you’re already choosing a phone, you should know about the LG Nitro HD and the HTC Rezound, two very similar phones on different networks (AT&T and Verizon, respectively) and with slight differences in features that you should take into consideration.

Both the Nitro HD and the Rezound are very similar when it comes to exterior design, actually. Both of them have the same form factor and overall look, with rounded edges, and a relatively ordinary finish. Both phones are made of quality materials, and unlike the Galaxy S2, which is mostly plastic, they’re mostly metal with some plastic parts, which are also very sturdy. The screen is covered with sturdy Gorilla glass, which is very scratch resistant, and while the Nitro HD is slightly longer and wider, it is also thinner than the Rezound, which makes them feel pretty much the same in your hand.

The displays on both smartphones are simply great – both of them have a 1280×720 pixels resolution, although the 4.3 inch size of the Rezound means that it has a higher pixel density – not that it matters, since you can’t distinguish individual pixels even on the Nitro HD’s 4.5 inch screen. HTC’s Super LCD and LG’s IPS technologies are both great, but the IPS wins at color reproduction and viewing angles, although the HTC is not that far behind.

The spec sheets for both the HTC Rezound and LG Nitro HD are very similar. Both phones also feature the same cameras – an 8 megapixels shooter on the back that can take 1080p videos at 30 FPS, and a 1.3 megapixels front facing unit for video calling. Of course, there’s the usual Wifi N, Bluetooth 3.0 EDR, GPS, DLNA, HDMI out, audio jack, USB port, and the 4G LTE radio, which isn’t all that useful at the moment, but the potential is there for extremely high data connection speeds – you’ll just have to wait for AT&T or Verizon to expand the network. The drawback of LTE, however, is a significantly higher power consumption, which leads to about 5-7 hours of battery life tops if you leave it on all the time.

The smartphones use the same 1.5 GHz, dual core Qualcomm processor with the new Adreno 220 graphics adapter and 1 GB of RAM, giving them pretty much the same performance in apps and games, although the customizations done by the manufacturers and carriers may affect the overall feel of the device.

There is a difference in the amount of storage space you have on the phone – while HTC was kind enough to include 16 GB of onboard memory, LG only provides 4 GB of internal space, of which about 2 GB is occupied by the system and is not user accessible.

Both the HTC Rezound and LG Nitro HD run on Android 2.3.5 Gingerbread, and while it’s a very good version of the OS, it’s not even close to the newer Ice Cream Sandwich. But unless you’re in a real hurry to use the latest and greatest version of Android (in which case you’ll need the Galaxy Nexus), you can wait a few months until HTC and LG release an update, which they definitely will. The custom UI on each phone is pretty good (especially HTC Sense), but it’s a matter of taste – you can always install your own preferred home screen app.

As I already said, both the LG Nitro HD and the HTC Rezound are great choices for a high end smartphone, and if you need the dual core power and high resolution, be sure to check them out.