Trending
You are at:Home»Smartphone Reviews»LG Nitro HD vs Motorola Droid RAZR – internal specs are the same, but the design is very different
By Gadgetman on Dec 19, 2011 · Smartphone Reviews 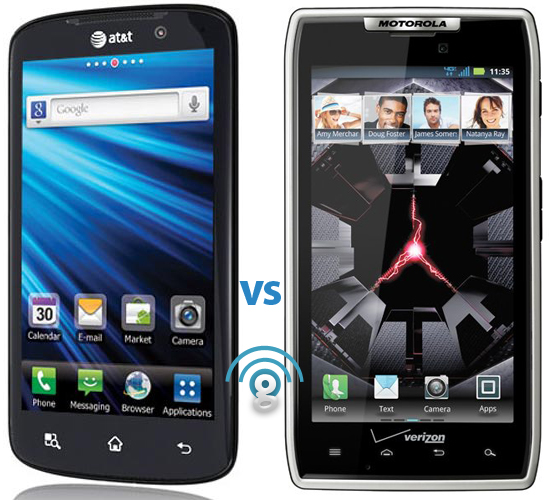 The 4G LTE standard has been around for a relatively short while, but it has already got all of the major US networks on the bandwagon, and even though the deployed coverage area is pretty small compared to 3G or even regular 4G (LTE basically works only in major cities, and even then, it’s spotty at best), there are already a few decent 4G LTE smartphones for buyers to choose from, and two of the best are the recently released LG Nitro HD and the Motorola Droid RAZR, which are on AT&T and Verizon respectively, and have quite a few enticing features, but also some differences, which makes the choice between a bit harder.

One of the main differences between the Droid RAZR and the Nitro HD is the exterior design – it just couldn’t be more different. While the Nitro HD sports the classic slab smartphone form factor, with nothing standing out except the textured back cover, which looks and feels very nice, the Droid RAZR has a very eye catching design – it’s super thin, with a sleek black finish on the all metal frame, and the back cover is made of Kevlar, which makes it a bit more durable and scratch proof (since there’s nothing to scratch). There’s also a new coating over the whole phone that is supposed to repel water and not let it damage the display or the electronics inside – that’s pretty useful for everyday use.

The displays are also pretty different – the Droid RAZR uses a new (for Motorola at least) 4.3 inch Super AMOLED unit with a qHD (960×450 pixels) resolution, which looks simply gorgeous, but LG’s 4.5 inch, 1280×720 pixels IPS screen isn’t far behind, either. It’s difficult to say which one is the best – on one hand, the RAZR has vivid colors, deep black levels and great outdoors visibility, on the other hand LG’s IPS provides accurate to life colors and decent contrast/brightness, as well. It’s up to personal taste, I guess.

On the inside, things are more or less equal between the two phones. Both of them have the usual collection of hardware features, including GPS, Wifi N, Bluetooth EDR, HDMI out via separate ports, 3.5mm audio jack, DLNA, an assortment of sensors, and of course a 4G LTE radio (which drains the battery pretty damn quickly on both of them, as well) and two cameras – an 8 megapixels unit on the back and a 1.3 megapixels front facing camera, on each device. Things change when you move on to the storage space – while the Droid RAZR has a full 16 GB of internal memory AND a micro SD card slot, the Nitro HD only has 4 GB onboard plus a micro SD card slot. This means that you’ll be able to have quite a lot more memory on the RAZR in the future when you upgrade your microSD card.

Performance wise, things are more or less the same, with Motorola choosing to go with their favorite TI OMAP chipset, this time a dual core 1.2 GHz chip, with an overclocked PowerVR SGX540 graphics adapter, which coupled with a full gigabyte of RAM provide enough performance to last for years to come – especially since Android still can’t take full advantage of two cores (although Ice Cream Sandwich is much better at it).

The LG Nitro HD uses Qualcomm’s latest dual core platform, as well – it’s running at a higher clock of 1.5 GHz, which makes it just a hair faster in some benchmarks. The 1 GB of RAM also helps in multitasking, but the Adreno 220 GPU, while good, is not better than the SGX540 – it’s even a bit slower in some 3D benchmarks. The difference is minimal and can’t be noticed at all in real usage, so it’s a moot point deciding which phone to get based on the performance.

Things are pretty much the same when it comes to software – both LG and Motorola ship the phones with Android 2.3.5 Gingerbread out of the box, and promise an update to Ice Cream Sandwich as soon as possible, which usually means a couple of months at most. Both Motorola and LG use their custom skins and modifications on the OS, and they’re really a matter of personal taste, and can’t be directly compared.

Overall, both the LG Nitro HD and Motorola Droid RAZR are very solid performers, providing everything a power user may need and more. Choosing between them is mostly a matter of personal taste in design, and also the network which you like most or has the best coverage in your area.