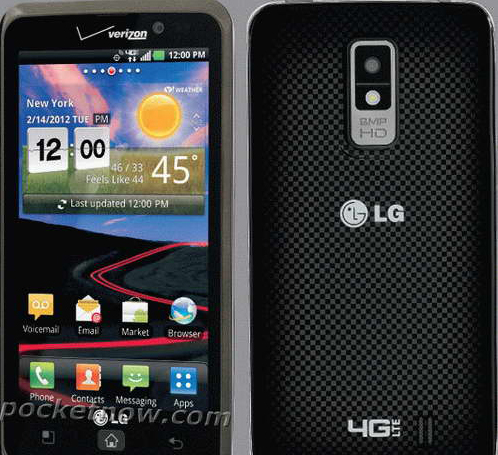 The LG Revolution was one of the first smartphones to carry an LTE radio on Verizon’s network, but otherwise it was a pretty standard midrange device that was released to keep people busy this past summer. The most attractive thing about it was the price, which was lower than any other LTE handsets, although you had to pay for that in performance.

And now, it seems that the network carrier will be getting the successor to the Revolution – the LG Spectrum, aka Revolution 2, is coming to Verizon at the beginning of 2012, with a new set of specs, which get it up to date with the competition.

There are some leaked shots of the device floating around the Web, and as you can see from them, the design of the device doesn’t seem to have changed much – the changes are mostly superficial, and it seems that the phone is thinner (as well as glossier overall).

Obviously, one of the main characteristics of the phone is its support for 4G LTE networks + worldwide GSM/CDMA connectivity (i.e. it’s a global phone), which makes it perfect for those who travel abroad, but sadly the phone will most likely not work with other GSM operators in the United States, as is the case with the Droid 2 Global and the Droid 3, for example. The new 4G LTE radio also supports much higher speeds than the first LG Revolution – that one was practically a prototype, with normal speeds of up to 12 Mbps download and 5 Mbps upload, while the LG Spectrum will go much higher.

Among the other confirmed specs are a new processor – a single core Qualcomm Snapdragon running at 1.5 GHz and using the Adreno 220 GPU. The new chip should be noticeably better than the old 1 GHz processor, although obviously it will not really compare with dual core platforms. On the plus side, it consumes less power, which means that the phone will last longer on 4G LTE, which is known for draining the battery very quickly. The display may also have a 1280×720 pixels resolution, although I think they will just go with a qHD unit, and the 8 megapixels camera on the back will be able to record 1080p video. Of course, nothing from the standard must have hardware features set will be missing – Wifi, Bluetooth, GPS, HDMI – everything is inside the device, ready to be used.

The LG Revolution 2 will obviously be running on Android, although it is unknown whether the company will go with Ice Cream Sandwich (which is currently on a roll out schedule for other LG phones) right away or just use the traditional pre-installed Android Gingerbread + Android 4.0 ICS as an over the air update.

Overall, the LG Revolution 2 looks like a pretty nice handset, and if it will have a mid-range price as the first model, it will undoubtedly find its users. I just hope that the battery will last longer than some current LTE handsets, like the Motorola Droid RAZR and LG Nitro HD.