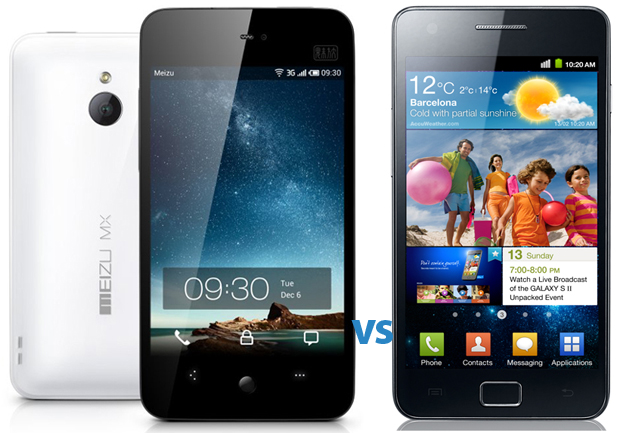 The smartphone market is quite loaded at the moment, with over two dozen different handsets from most of the known manufacturers competing in all price ranges. The high end niche is especially full, seeing as smartphones are still mostly used by tech savvy people. Aside from the iPhone 4S, most of other phones run on Android, which is by far the best OS on the market at the moment, especially its latest version 4.0 Ice Cream Sandwich.

One of the most popular flagship Android smartphones to date is the Samsung Galaxy S2, which came hot on the trails of the first Galaxy S, and quickly became the best-selling device on the market. The downside to it is its high price – even more than half a year after it was released, it still costs more than similar competitors. On the other side of the fence, a relatively unknown Chinese start-up, Meizu, is planning on taking on the high end market with an affordable, yet still powerful and well-built smartphone running a customized version of Android.

The Meizu M9 was the first in the line and it was quite the success, especially since it was half the price of the Galaxy S2, but it had some issues with the build quality. Its successor, the Meizu MX, seems like it’s perfect, and while it is more expensive, it’s still a lot cheaper than a Galaxy S2, while being more powerful and dare I say, better built and better looking, too. It’s interesting to see these two phones side by side – the choice isn’t as easy as you might think at first.

The Galaxy S2 was universally praised for its great design, even though it’s made mostly out of plastic and that makes it a bit less durable than other phones (like the thicker Sensation or even the new all metal + Kevlar Droid RAZR). It’s 8.5mm thin, and it looks pretty damn cool. The Meizu MX is surprisingly not far behind – it seems that it got a lot of cues from the leaders (iPhone 4 and the GS2, in particular), with it being stylish and minimalistic on the outside, with just the big screen and navigation buttons on the front and a glossy back cover with the big camera near the top. It’s not as slim as the Galaxy S2, but at 10.3, it’s not that thick, either.

Display-quality wise, there’s very few phones that can rival the 4.3 inch Super AMOLED Plus unit that Samsung uses on the GS2 – it’s just top of the line, with great contrast, brightness, sunlight visibility and viewing angles, plus of course the colors are amazing, as well. Even its 800×480 pixels resolution is not that much of a downside thanks to the dozen of subpixels per pixel the technology uses.

The Meizu MX uses a pretty good and unique display, too – its 4 inch 3:2 format ASV LCD unit has a 960×640 pixels resolution (the same as on the iPhone 4, yes), which also looks simply great. The picture is sharp and clear, the colors and contrast are awesome and you can fit more text on the screen at the same time, as well.

Both the Galaxy S2 and the MX have the same hardware features, including Wifi N and Bluetooth adapters, GPS, HDMI, DLNA, 4g support, accelerometer/gyroscope/magnetometer and other sensors, and two cameras – an 8 megapixels unit on the back and a 2 megapixels front facing camera, on both phones.

Even the main platform is the same: the Galaxy S2 uses Samsung’s own 1.2 GHz Exynos chipset, with the Mali 400 GPU, and the MX also uses the same chip, only clocked at 1.4 GHz. It’s pretty interesting that Samsung agreed to produce it for Meizu, but I guess they’ve already got their ROI out of the platform and want to make some more money for their quad core processors for the next generation of flagship phones. Technically, the MX is slightly faster, but not by that much. Both phones have 1 GB of RAM, which is currently more than enough for multitasking and resource intensive apps. The Galaxy S2 comes in two variants, one with 16 GB of onboard ROM and one with 32 GB, while the Meizu MX only has 16 GB, and both devices have a micro SD card slot for expansion.

Samsung of course ships the Galaxy S2 with Android 2.3 Gingerbread out of the box, and it also has the Touch Wiz customizations installed, and Meizu does pretty much the same with the MX, only their Android OS is slightly more modified, so they call it Flyme OS. The customizations are quite nice – Flyme is more like iOS, sleeker and less Android like, but the company lets you install a vanilla version or any custom ROM, if you want (as does Samsung, by the way). Both phones will be getting the Ice Cream Sandwich update, so no worries there.

As you can see, the Meizu MX is pretty much equal to the Galaxy S2, and it’s even a bit faster with the updated Exynos platform, but here’s the kicker: while the GS2 still costs about $800 unlocked and without a contract, the Meizu MX will start reselling for $470, which is quite a lot cheaper. If the quality is at least on par with its predecessor M9, it is definitely a phone you want to check out before deciding what to get.