Trending
You are at:Home»Smartphone Reviews»Motorola Droid 3 vs Samsung Captivate Glide – comparing two of the best QWERTY smartphones on the market
By Gadgetman on Dec 12, 2011 · Smartphone Reviews 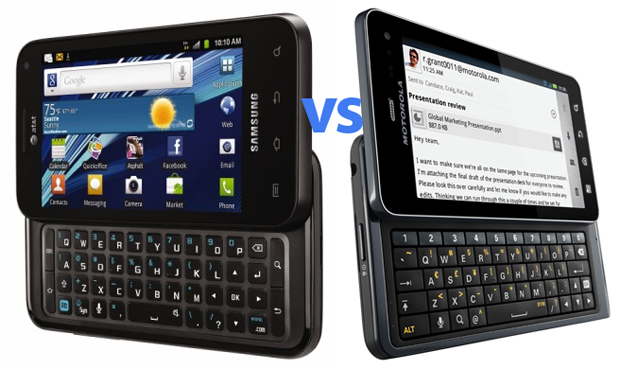 Of almost two dozen smartphone models on the market, there are actually very few with a built in hardware keyboard, and while the iPhone has demonstrated that you can live without one and even type faster, it’s much more comfortable to work and play with one than without. An integrated keyboard gives you the ability to type and see more stuff on the display, instead of having a virtual keyboard cover three thirds of the screen – we’re still waiting for the ability to change their size, and they look almost ridiculous on the newer 4.3 and 4.5 inch displays.

Two of the best smartphones that have a landscape QWERTY keyboard are the Motorola Droid 3 and the Samsung Captivate Glide. Sure, there are older models as well, but these two also have the performance to back up the productivity that the keyboard gives you. And you can’t buy both of them, so which one is actually the best?

The Droid 3 looks simply awesome on the outside – you’ll love it if you liked the first Droid’s design. The industrial finish looks strict and professional, and the phone is mostly made out of metal, with a Gorilla glass covering the display and a plastic cover on the back that is easy to remove and is pretty durable, as well (you can bend it quite a lot and it doesn’t break).

The Captivate Glide looks simpler and has more plastic, but make no mistake – it’s also a pretty good looking and well-made smartphone. It looks just like its prototype, the Galaxy S2, on the front, but the sliding mechanism feels slightly different. I’ll have to say that the Droid 3 is definitely a bit more sturdy, though.

The display round is won by the Samsung, hands down. The 4 inch Super AMOLED display, even with its 800×480 pixels resolution, is simply a beauty to look at. The 4 inch qHD (960×540) PenTile LCD on the Motorola doesn’t even come close. However, while the Super AMOLED is excellent, the Droid 3’s LCD consumes less power and is brighter, plus the colors are definitely good enough for everyday work, despite some pixelation.

Most of the features are very similar on both phones. Both of them have Wifi N, Bluetooth, GPS, HDMI out, 4G support, DLNA, an audio out jack and a lot of sensors in and around the housing. The camera on the back of both devices has 8 megapixels, LED flash and support for 1080p video recording, but the one on the front is better on the Droid 3 – it has 1.3 megapixels and is therefore much better at video and taking photos than the 0.3 MP VGA resolution unit on the Captivate Glide. The Samsung has more memory, though – at 16 GB, it’s twice as much as what you get in the Motorola, however both phones have a micro SD card slot, so you can add up to 32 GB more on each phone – plenty enough for most people.

The performance should be about the same on both phones – each of them has a dual core 1 GHz processor, with Motorola going with their favorite chipset, the TI OMAP (series 4, with the revamped PowerVR SGX540 graphics adapter), and Samsung choosing NVidia’s Tegra 2 (with the GeForce GPU). The Droid 3 has twice the RAM that the Captivate Glide has, 1 GB vs 512 MB, which means that intensive apps will run better, as will multiple apps open at the same time.

Obviously, you can’t compare two QWERTY sliders without paying special attention to the keyboard, and frankly, the Droid 3 wins out for me. Don’t get me wrong, the Captivate Glide has a pretty decent keyboard, which feels a lot like the one on the original G1, but the flat keys are a bit bad when you have to guess whether you pressed them or not. The Droid 3 has the keys separated, unlike its predecessors, and they’re also more raised, making it easier to tap away at full speed – you can easily achieve more than 40-50 words per minute with this thing!

Both the Droid 3 and the Captivate Glide come with Android 2.3.5 pre-installed, and are on queue for an Ice Cream Sandwich update in a few months. Samsung’s Touch Wiz and Motorola’s toned down MotoBlur are a matter of personal taste – I don’t like either, for example, but thankfully, you can always install your own launcher and remove or block the existing one if you don’t like it.

The price for both the smartphones is about the same, and with Christmas coming, it will most likely go down considerably, especially since the new 4G LTE models are coming up (the Droid 4 is already here). If you’re looking for a powerful smartphone with a great QWERTY keyboard, the Droid 3 and Captivate Glide are both excellent choices – I’d recommend the former, though, if you want the best.