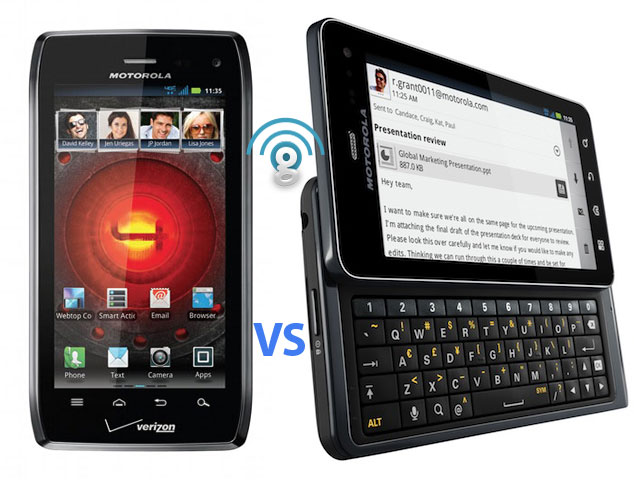 The Droid has become the poster child for Android and powerful smartphones in general, and with the latest Droid 3, Motorola only reasserted that position – the device is practically the best QWERTY smartphone on the market, with the closest competitor being AT&T’s Captivate Glide, which is practically the Galaxy S2 with a QWERTY keyboard, and even that phone can’t compare with the Droid 3 build quality wise.

Even though the Droid 3 was released on the market just a while ago, Motorola and Verizon have already announced the successor, Droid 4. Some expected it to be a major update, but it looks like it will not even be like the Droid 2 upgrade – more like the Droid 2 Global was to the Droid 2, a very small update. So, is it worth waiting for the Droid 4, which will be available at the end of December 2011 and will cost more, or should you just go with the Droid 3?

The biggest change in the Droid 4 from the Droid 3 and the previous models is in the exterior design – the new phone uses pretty much the same design and finish as the recent Droid RAZR, except that it’s thicker because of the integrated keyboard. The build quality is pretty much the same if you compare the Droid 4 with Droid 3, as both are made of metal, have Gorilla glass on the front and a plastic back (no Kevlar on the 4, sadly), so you’d have to choose based on design, which is pretty hard, since both look great. I suppose the Droid 4 appeals to a wider range of people, but the unique industrial design of the Droid 3 is pretty attractive, as well.

The display on both phones is, sadly, exactly the same – a 4 inch unit with 960×540 pixels resolution. “Sadly” because this particular 4 incher uses a PenTile matrix (less subpixels in a different arrangement, basically), which increases brightness and decreases power consumption, but at the same time reduces the picture quality, making the colors slightly out of balance and the screen look pixelated in a lot of cases. Many were hoping that the next Droid would bring a change (hopefully the beautiful Super AMOLED that the RAZR has), but alas, it did not happen with the Droid 4.

The hardware hasn’t changed much between the Droid 3 and 4, save for the 4G radio, slightly faster processor and more RAM on the Droid 4, but you won’t notice those changes in everyday tasks, for sure. The Droid 4 has a 1.2 GHz dual core processor an 1024 MB of RAM, compared to the 1 GHz dual core and 512 MB RAM on the Droid 3 – the higher amount of RAM may be noticeable in multitasking, especially with the Android 4.0 upgrade.

The other features are pretty much the same – both Droids have a Wifi N and Bluetooth 2.1 EDR adapters, GPS, accelerometer/magnetometer/gyroscope/proximity/light sensors, built in storage space (16 GB on the Droid 3, an undisclosed amount on the Droid 4, but I’m guessing it’s also 16 GB) and a micro SD card slot for expansion, two cameras for photos, HD video recording and video calls (8 and 0.3 megapixels on the back and front, respectively), separated micro USB and micro HDMI out ports, and a global radio that makes the phones useful worldwide, with a SIM card slot provided for GSM networks.

The Droid 3 is shipping with Android 2.3.5 Gingerbread, and so will the Droid 4 when it comes out at the end of the year, however both of them will also get the Ice Cream Sandwich update at about the same time in a couple of months, and with the same version of MotoBlur slapped on both devices, there won’t be much of a difference in the interface or software out of the box (they’re both on Verizon, too).

The price will be higher for the Droid 4, because of its 4G LTE radio – the difference will probably be around $100 with a contract, so it’s pretty significant off the bat. In my opinion the Droid 4 isn’t really worth it – the only reason to pay more for it would be the LTE radio and the design – unless you like the Droid 3 better and you find 14.4 Mbps a good enough speed or you don’t live in the center of a big city (which is pretty much the only place where 4G LTE works as it should right now).