Trending
You are at:Home»Smartphone Reviews»Motorola Droid RAZR vs Nokia Lumia 800 – the Android and Windows Phone 7 flagships go head to head
By Gadgetman on Dec 21, 2011 · Smartphone Reviews 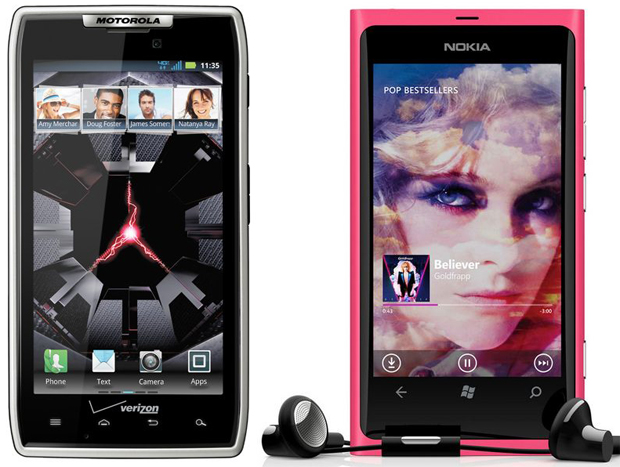 In the Android smartphones world, the Nexus series is widely recognized as the flagship, mainly because it’s Google’s own official handset and they’re basically the ones who develop the OS, so it stands to reason that the hardware will also be good and work perfectly with the software. But there are actually a lot of great phones on the market that would deserve the flagship moniker, and the Droid RAZR is definitely the winner for me. The thing has style, power and quite a few features that are missing on the latest Galaxy Nexus.

In the meantime, the Windows Phone 7 world is rocked by Nokia’s new handsets, and the Lumia 800, previously known as the Sea Ray, is the most advanced of the bunch (the HTC Titan is not better, by the way – it’s just bigger, the performance and other features are practically the same). Let’s see how the top dogs from each camp compare:

While Nokia does score some points on the ingenious design, with the Lumia 800 being made out of one piece of polycarbonate plastic, which makes the phone just as sturdy as a metal frame design, but lighter and with better reception, the Motorola Droid RAZR just looks and feels better. It has a metal housing, with a Kevlar covered back, and the cold metal feel when you first pick it up has a more premium feel to it. The RAZR is also the thinnest smartphone in the world at 7.1 mm (if you don’t count the hump at the top, which is still only 8.5mm), but it’s longer and wider than the Lumia 800 because of the bigger display.

The AMOLED displays on both phones, by the way, are almost equal when it comes to color reproduction, contrast, viewing angles and brightness, although the 4.3 inch, 960×540 pixels unit on the RAZR sure looks more comfortable for work and play than the 3.7 inch 800×480 screen on the Lumia 800.

On the inside, the Droid RAZR bests the Lumia 800 in almost every aspect – not by much, but it does. The Lumia 800 can boast about its Wifi N, Bluetooth, GPS, the usual collection of sensors, a HDMI out port, 8 megapixels camera on the back with Carl Zeiss lens and support for 720p video recording, support for up to 14.4 Mbps download speeds on 3G networks and 16 GB of internal storage space.

The performance is undoubtedly better on the Droid RAZR: it’s dual core 1.2 GHz TI OMAP 4430 chip can easily outperform the 1.4 GHz single core Snapdragon inside the Lumia 800, especially with a full 1024 MB of RAM at its disposal (as opposed to only 512 MB on the Nokia). The graphics performance is also better thanks to the improved PowerVR SGX540 graphics adapter used by TI, which beats Qualcomm’s Adreno 205 in practically any benchmark or game.

Windows Phone 7 is a decent OS and it has its strengths, but it can barely compete against Android 2.3.5 Gingerbread, and it sure will fall behind the new Ice Cream Sandwich, which is already on the way for many Android smartphones and tablets, including the Droid RAZR. The new Android 4.0 will have a sleeker interface, a ton of new features, and it will probably not crash as often as Microsoft’s OS, either. The apps market is also bigger for Android, although Windows Phone 7 still wins at the quality of games and support for Xbox Live integration.

Nokia’s promise of a new start for Windows Phone 7 seems to fall short, and it’s mostly because of the lack of support for dual core processors in the OS (well, Nokia was never known for using the latest hardware, either). The Motorola Droid RAZR is better in almost every aspect, and at about the same price, I really don’t see why anyone would choose the Lumia 800 over this Android power house (that will be especially true when it finally gets the Ice Cream Sandwich update).