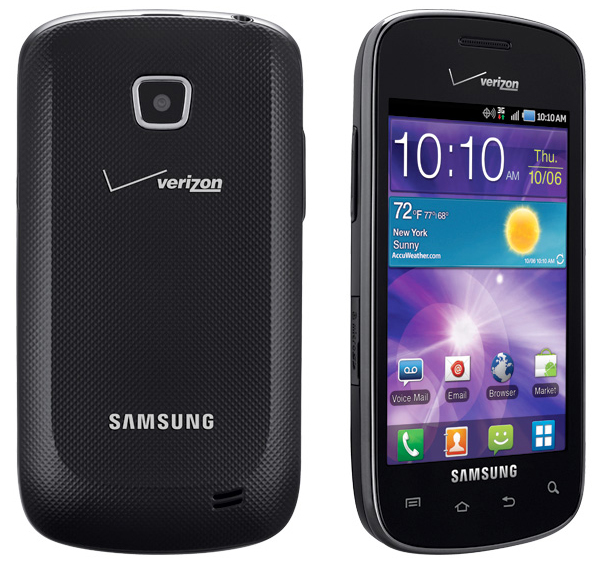 Verizon’s 4G LTE network is slowly expanding across the country, however at the moment, the difference in speed between LTE and the usual 3G/4G isn’t that great for most people (those who live closer to the towers get all the advantages, of course). What’s more interesting is that the price for 4G LTE smartphones were pretty darn high, much higher than for high end 3G smartphones that often were better in every other aspect.

With that in mind, Verizon has announced the Samsung Illusion, which is set on giving budget conscious people the ability to get a decent smartphone that doesn’t have the fancy new LTE radio, but which has a fair price. The new phone is a budget model that may be attractive to some people, but is pretty mediocre overall.

The Illusion is made mostly out of plastic, and while that doesn’t stop it from being relatively sturdy and sitting great in your hand, it just has a cheap feeling to it, unlike other similarly priced smartphones. The design looks like a mix between the Corby and the Nexus S, with the same overall shape, lip on the back and rounded corners. The small size and weight (115x60x11.9mm and 119 grams) make it great for carrying in a pocket, and you don’t sacrifice much in screen size either – the Illusion has a 3.5 inch display.

The resolution of said display does disappoint, however – at 320×480, it’s at the bottom level when it comes to comfort – it’s really hard to use it for anything other than Android native apps, and you’ll have to scroll a lot in the browser and any text documents. The quality is OK – it’s just as good as the LCD next door, with decent contrast, brightness and colors, but slightly worse viewing angles.

The hardware specs are pretty mediocre – besides the lack of a 4G radio, the Samsung Illusion has the usual Wifi, Bluetooth, GPS and a set of sensors, as well as a 3 megapixels camera on the back and 2 GB of internal storage space a micro SD card slot for expansion. The phone actually ships with a 2 GB card in the box, but of course you can get a bigger one if you need more memory for your files and data.

The performance of the device is nothing out of the ordinary – in fact, it’s at the lower end of the spectrum, with a 1 GHz Qualcomm Snapdragon and the Adreno 205 graphics adapter running things inside, aided by 512 MB of RAM, which is actually the highlight of the phone. While most apps and games should run fine, you’ll notice slow-downs when editing large documents, watching HD videos and browsing the Web, for example.

The Samsung Illusion will run Android 2.3 Gingerbread out of the box, and will of course also feature Samsung’s own Touch Wiz interface, which is pretty good, although some people may not like it. It’s unlikely that the handset will ever get the Ice Cream Sandwich update, seeing as it is a budget phone and they don’t usually get much priority in this matter.

The Samsung may be a good offer in Verizon’s mind, but at $80 with a two year contract, I wouldn’t go anywhere near it. The bad display and slow performance alone make it worth paying just a bit more for a better phone, which you’ll easily find even in Verizon’s repertoire.