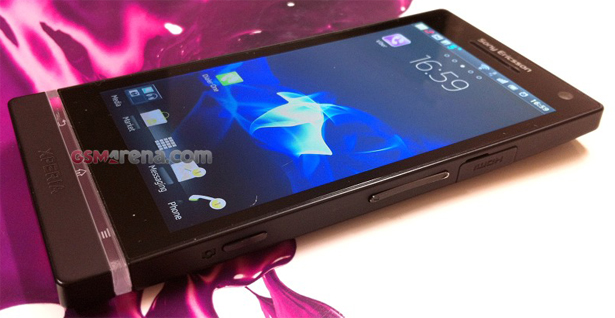 Sony has finally acquired Ericsson’s share of the joint company, so starting 2012, we’ll be seeing Xperia’s that only carry the Sony name. Quite a step forward for Sony, and a bit of a sad day for Ericsson, which is no longer in the phone business, after being on the market for over two decades (obviously, they’re still a telecommunications company, but I’m talking about end user products).

Before the brand goes away completely, we’ll have one last shot at glory – the Xperia Arc HD, previously known under the code name Nozomi, which will be released in the following months (probably around February 2012) and will bring quite a few features and changes over the previous phones. The specs have been leaked long ago, and now we’ve got some real photos to look at, as well, so let’s see what we’ll be getting (hopefully for Christmas).

First of all, the new Xperia Arc HD sports a noticeably different design – instead of the usual curvy lines of the previous Xperia’s, the new phone has a boxier design, with straighter corners and edges, and there’s no curve like the two Arc S had, either. From the back, the phone actually looks a lot like Nokia’s Lumia 800, complete with the matte black finish on the plastic housing, but looking at it from the front, you can see a distinctly unique smartphone that doesn’t remind of anything else on the market.

You can also notice the big 4.3 inch display, which has a resolution of 1280×720 – it seems that the company is finally getting along with the times. The phone will indeed be a great competitor to the Droid RAZR and the Galaxy Nexus. The colors and contrast should be great thanks to Sony Ericsson’s Bravia engine, as well as the darkened glass that covers the screen and also protects it from scratches.

While Sony Ericsson smartphones are usually focused on looking good, the Xperia Arc HD won’t have any trouble when it comes to competing on performance, either. Sony Ericsson will be using one of the fastest chipsets on the market inside the new phone: the third generation, dual core Qualcomm Snapdragon, with the processor cores running at 1.5 GHz each and the Adreno 220 graphics adapter taking care of the graphics and video performance. The 1 GB of RAM shouldn’t surprise anyone except previous Sony Ericsson owners – this time, the company has gone all out, and it will definitely be noticeable in multitasking and resource intensive apps.

The main camera is also one of the best – it’s a 12 megapixels Exmor R unit, with support for Full HD video recording, of course. The storage space is only internal, and you’ll have a choice of 16 or 32 GB – if you’re getting this phone, I’d recommend you get the 32 GB version, since you’ll have enough hardware power but not enough space in a pretty short time.

Overall, the Sony Ericsson Xperia Arc HD looks like it will be a winner phone, and definitely a great send off for the brand name – let’s hope that the future Sony Xperia phones will be even better!