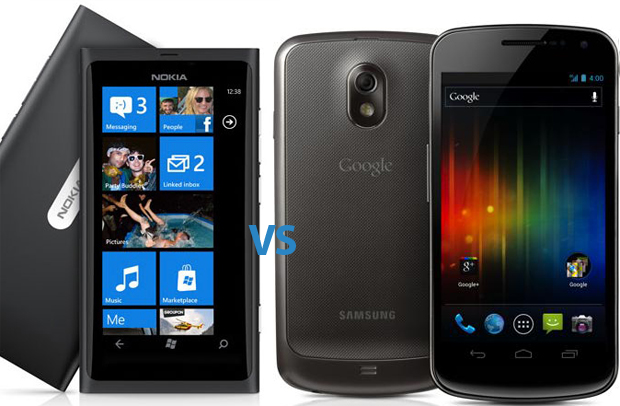 Android is currently the most popular OS for mobile devices, and when it comes to specific handsets, I’d say that the Nexus series by Google is definitely the flagship. The first Nexus One was manufactured by HTC, but for the next two models Google switched to Samsung, which lead to an improvement in the quality of the design, mostly. The Galaxy Nexus is the third in line, and is one heck of a smartphone – it looks great, has a lot of hardware features and performance and it runs Android 4.0 Ice Cream Sandwich, the latest version of the OS.

Meanwhile, in the Windows Phone 7 camp, the Nokia Lumia 800 is touted as the next generation of Windows smartphones, and even though it looks pretty good on the outside with its unique unibody polycarbonate design, the processing power isn’t all that impressive. It is interesting to compare the two flagships for each OS, so here’s the scoop.

It’s pretty hard to compare the exterior design of the Lumia 800 with the Galaxy Nexus – both have a very unique design that will be attractive to some people and look ugly to others. Suffice to say that the build quality of both smartphones is very high. Nokia’s unibody polycarbonate construction makes for a very sturdy and light phone, and the Wifi/Bluetooth/cellular reception should be very high thanks to the lack of metal parts.

The Galaxy Nexus is also very well made, even though Samsung went with quite a lot of plastic in the housing, compared to the Droid RAZR and most HTC phones, for example. But then again, Samsung did that with the Galaxy S2, as well, and that phone is also pretty sturdy. The glossy plastic of the previous model has now been replaced by a nice soft touch plastic, which makes it easy to hold the phone and doesn’t get nearly as many fingerprints. The curved front glass remains, and it’s pretty nice, too.

The display, internal hardware and performance

It’s hard to compare the displays of these phones, since they’re just too different. The Nokia Lumia 800 has a decently sized display at 3.7 inches and with a resolution of 800×480 pixels it can be used comfortably for most tasks, plus the AMOLED and ClearBlack technologies make the contrast, colors and brightness some of the best in class. The Galaxy Nexus’ display completely outclasses it, however, with its big size (4.65 inches), 1280×720 pixels HD resolution and Super AMOLED technology, which is still in the top 3 when it comes to picture quality. On the other hand, the Lumia 800 is noticeable smaller (116x61mm vs 135x68mm), although it’s thicker by 3mm and slightly heavier, as well.

Most of the hardware specs on both phones are pretty much the same – there’s your usual Wifi N, Bluetooth, HDMI, DLNA, GPS and an assortment of sensors. The differences include a better 8 megapixels Carl Zeiss camera on the Nokia (vs a 5 megapixels unit on the Nexus), the higher 4G speeds on the Galaxy Nexus (21 Mbps vs 14.4 Mbps) and the amount of internal storage space (32 GB on the Nexus vs 16 GB on the Lumia 800, with no micro SD card slot).

Obviously, since Windows Phone 7 does not support multiple processor cores, the Galaxy Nexus wins outright in the performance category – its dual core 1.2 GHz TI OMAP 4460 platform has a much higher top performance than the single core 1.4 GHz Qualcomm in the Lumia 800. The 1024 MB of RAM help cement the victory. However, in most day to day apps you will probably not notice the difference.

While Windows Phone 7.5 added a lot of bug fixes and new features (but mostly bug fixes), the new Android 4.0 Ice Cream Sandwich completely outclasses it. It’s Google’s first universal OS to work on both smartphones and tablets, and they’ve put in a lot of work to make it the best there is. The new interface actually looks a lot like WP7’s, with 2D graphics taking over the glossiness and 3D elements of previous versions. There are a lot of improvements under the hood, as well, like the new Android Beam feature, improved multitasking capabilities, Face unlock, better browser and Google apps, and more. I don’t know whether Windows Phone will get a new update any time soon, but I’m pretty sure it will still be worse than Android 4.0.

Interestingly, despite the difference in top performance and display resolution, both phones are pretty close to each other in overall quality and user experience. However, if it was up to me, I’d choose the Galaxy Nexus any time of the day – with the major improvements in Ice Cream Sandwich, this phone is much better than any Windows 7 smartphone out there, including the Lumia 800.