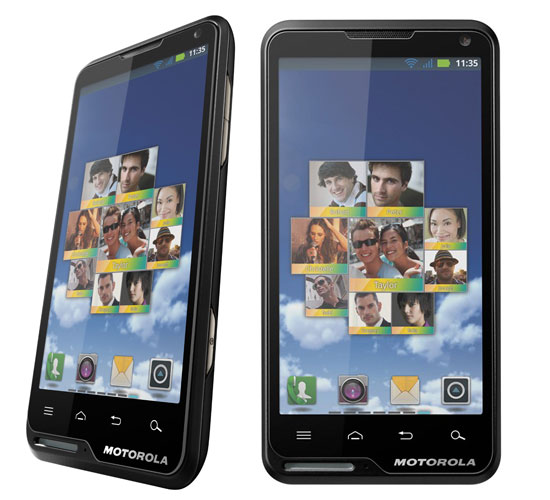 Motorola keeps on churning out attractive smartphones, and this year, besides the Droid 4 and RAZR Maxx, they’ve released another pair of phone – this time in the budget niche. The first one is the DEFY Mini (and yes, the name is spelled with CAPITAL letters, to stand out, I guess), which is a decent, if a bit underpowered, rugged smartphone. The second one is the MOTOLUXE – a mid-range handset that has actually been available for a while now in China under the name XT615.

The MOTOLUXE doesn’t use the new hexagonal design that Motorola implemented on all their other phones (except the DEFY Mini), but it’s pretty attractive in its own right. It has a traditional slab form factor, with a screen and navigation buttons on the front and the camera + LED flash and a loudspeaker on the back. The back cover is removable, so there’s the possibility of adding an extended battery with its special cover.

The display is a 4 inch 854×480 pixels LCD unit – nothing special, but good enough for most tasks. It actually may look better to some people than Motorola’s infamous PenTile matrix display used on the Droid 3, which looked pixelated in certain conditions and didn’t show all colors properly.

The resolution is also enough for Web browsing, watching video, viewing documents, using any apps and more – there’s no issue with that, for sure.

The performance is provided by an 800 MHz Snapdragon processor, aided by 512 MB of RAM and the Adreno 205 graphics adapter – a bit slow in today’s mobile world, but still fast enough for most daily tasks (plus if developers root the phone, the CPU is easily overclockable to 1.2 GHz and more). There is no camera on the front, but the one on the back has a respectable 8 megapixels sensor and supports HD video, as well – it should be more than enough for the occasional shot or clip.

The other hardware features are pretty standard for a modern smartphone. You’ve got the usual Wifi N and Bluetooth adapters, GPS receiver, a 3.5 mm audio jack, HSPA+ 3G radio inside, a micro USB port and several sensors required for normal operation. There are only 512 MB of onboard memory, and they’re meant for apps, so you’ll have to provide your own storage space with a micro SD card – on the plus side, it means that you can have up to 32 GB onboard, which is more than some high end phones offer nowadays.

Of course, you can’t expect the MOTOLUXE to be shipping with Android Ice Cream Sandwich, and the XT615 has had the 2.3.7 Gingerbread version of the OS for a while, so it will also be ported to the European and US versions of the phone, as well. The OS is probably the better choice for this phone anyway, since the slow processor and limited amount of RAM would make ICS slow anyway.

The exact release date has not yet been revealed, but the phone is expected to start shipping to Europe and South America starting this February, which is pretty close. The price should be around $100 or less – I wouldn’t expect anyone to pay more than that for a mid-range phone on a contract.