Trending
You are at:Home»Smartphone Reviews»Prada Phone by LG 3.0 vs Motorola Droid RAZR – not much difference in style, a wide gap in price
By Gadgetman on Jan 3, 2012 · Smartphone Reviews 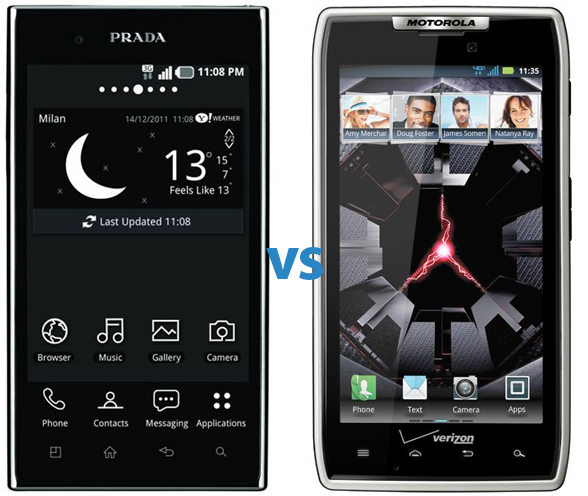 Just a few days ago, Prada and LG announced another result of their partnership – the Prada Phone by LG 3.0 smartphone (yes, I know it’s a mouthful). You may remember their first two phones, the first of which had a capacitive display before the iPhone (but no smart OS to speak of). Well, the third one is a full-fledged smartphone, packing power and running Android inside a beautiful housing. But is it worth the premium cost?

The question is especially worth asking since other high end Android phones on the market provide the same features and even good looks, at a much lower price. The Droid RAZR is the best example – it’s powerful, super slim, very well built and great looking. So which one would you choose if you had the chance? Maybe this short comparison can help you decide.

It’s clear that the Prada Phone is banking on its design and unique branding, and sure enough, the Prada Phone 3.0 looks and feels great. It’s got a clean cut design with straight corners, a textured back and a big display on the front. It’s understated, yet fashionable – you’ll also know that this is not simple phone when you see the Prada branding on the front and back of the phone.

While the Prada Phone 3.0 looks quite different than many Android phones with their rounded corners and flashier colors, it’s actually surprisingly close to the Droid RAZR, which also uses an understated industrial design, is made mostly out of metal and has a Kevlar covered back and a big Gorilla glass covered display on the front. It’s like they’re born competitors! The RAZR also feels very sturdy, but unlike the Prada Phone, you’ll have to live with a bunch of markings on the back, which are pretty unsightly – why couldn’t they just put a simple Motorola logo there?

The displays on both phones are similarly sized but different when it comes to quality, with the Droid RAZR’s AMOLED 4.3 incher using a resolution of 960×540 pixels and winning when it comes to color reproduction and black levels, compared to the 4.3 inch, 800×480 pixels NOVA display used by LG on the Prada Phone 3.0, which is bright, uses less power, but is nothing special when it comes to colors and contrast.

The performance should be pretty much equal on both devices, seeing as they use the same TI OMAP 4430 chipset, although it runs slightly faster on the RAZR, at 1.2 GHz (1 GHz on the LG). There’s 1024 MB of RAM, which means that multitasking and resource intensive apps won’t be an issue.

Both phones also offer pretty much the same selection of hardware features, with the usual Wifi, Bluetooth, GPS, accelerometer and magnetometer being present, as well as an 8 megapixels camera on the back and a smaller camera on the front for video calls. However, the Prada Phone, being mostly fashion oriented, does not have a HDMI out port, 4G radio or a micro SD card slot, which are present on the Droid RAZR. Moreover, the internal storage space is only 8 GB (16 GB on the RAZR), but I guess owners of this smartphone won’t be filling it with that much data, anyway.

The Motorola Droid RAZR and the Prada Phone by LG 3.0 have the same Android Gingerbread OS, but it’s much more customized in LG’s case, with the interface being very understated, just like the outside of the phone, with white on black icons on the home screen and an overall black and white finish. Motorola’s MotoBlur looks pretty normal by comparison. The Droid RAZR will also be getting an Ice Cream Sandwich update, while it’s unknown whether or when the 4.0 version of Android will come to the Prada Phone (seeing as it’s a fashion phone, LG and Prada may decide it doesn’t even need it).

While we don’t actually know the price for the Prada Phone by LG 3.0, we know it’s going to be high – quite a lot higher than the most expensive mainstream Android phone, actually. But I don’t see why anyone would choose it over the Droid RAZR (or the Galaxy Nexus, for that matter, but that’s another talk) – with the same overall performance, more hardware features, better display and a great and durable design, the RAZR can easily compete with the LG Prada Phone – unless you really like the brand, that is.