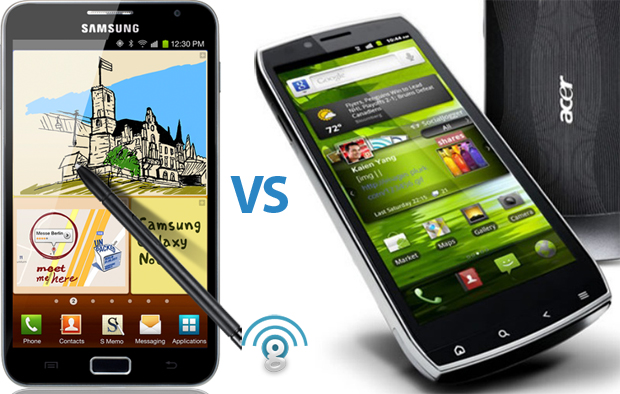 After the Dell Streak started the trend, other manufacturers followed through with their own smartphone/tablet hybrids, and among the most successful designs, Samsung and Acer stand out with their Galaxy Note and Iconia Smart S300 handsets. While both of them look pretty good, it’s interesting to see which one’s actually better and which company learned more from Dell’s mistakes. So here’s a short comparison.

Both the Iconia Smart and the Galaxy Note have a pretty good exterior design, although obviously the smaller 4.8 inch 16:9 format display on the Acer makes the phone smaller and therefore better if you want to use it with one hand or carry it in a pocket – you can’t really put the Galaxy Note in any normal pockets, unless you want to crack the display.

Speaking of which, the 5.3 inch monster screen on the Note is simply fantastic – using Samsung’s Super AMOLED technology and a staggering resolution of 1280×800 pixels (16:10 format), this display is one of the most beautiful on the market and it provides one of the best pictures you’ll ever see. Too bad it’s not Super AMOLED Plus – then it would’ve been perfect. The Iconia Smart’s 4.8 inch 1024×480 pixels unit isn’t far behind picture sharpness wise, although the colors and contrast are not as good as Samsung’s.

The main hardware features of the Samsung Galaxy Note and Acer Iconia Smart S300 look pretty much the same on paper – there’s your usual Wifi N, Bluetooth 2.1 EDR, GPS, DLNA, HDMI out, an 8 megapixels camera on the back with support for HD video recording and a 2 megapixels unit on the front for video calls and other goodies. The differences include support for 1080p video recording on the Galaxy Note (only 720p on the Iconia Smart) and 32 GB of integrated storage space, also on the Note – there’s only 8 GB inside the Iconia Smart, although the micro SD card slot on both phones means that it’s not that big of a deal.

The performance winner is clearly the Galaxy Note, with its dual core Exynos chipset, Mali 400 GPU and 1024 MB of RAM, which is much better than the Iconia Smart’s 1.1 GHz single core processor, Adreno 205 graphics adapter and 512 MB of RAM. The 1 GHz Snapdragon is still good enough for most tasks, but you’ll definitely start noticing slow-downs in rendering Web pages and some more intensive apps – something that does not happen with the dual core Exynos.

Both the Galaxy Note and the Iconia Smart use Android 2.3 Gingerbread as their main OS, and that’s more than enough for most people. However, the single core processor in the Iconia Smart means that the phone will most probably never get the Ice Cream Sandwich update, which is quite a drawback when compared to the Galaxy Note, which already has the Android 4.0 update on the way. Therefore, the Galaxy Note is more future proof software wise, not to mention that everything runs faster on it.

While Acer did a great job at designing the Acer Iconia Smart, the Galaxy Note beats it in almost every aspect, from performance to display quality to the users it targets. However, the Galaxy Note is already on the market, while the Iconia Smart is only in development stages, so maybe the end specs will change and we’ll get a much better phone than expected. For now, the Samsung Galaxy Note is the best choice for a smartphone/tablet hybrid.