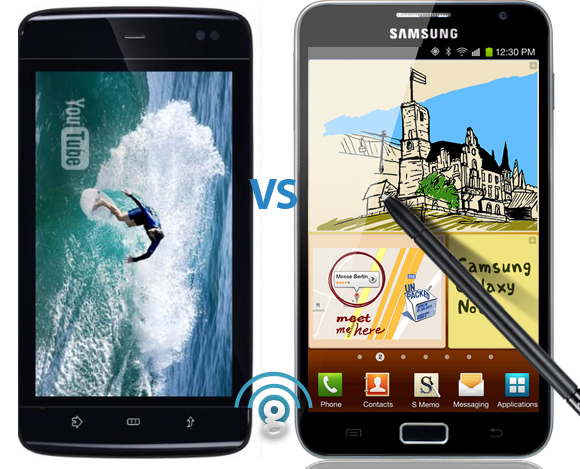 The 5 inch Dell Streak may not have been a success (it was pretty much a failure, actually), but it certainly started something in the industry, with many other manufacturers planning or already having a big screened device on the line. While smartphone displays have been getting progressively larger for the past several years, anything over 4.5 inches is almost guaranteed to be too big for most pockets (with the exception of the newer 16:9 format displays, like the 4.65 inch unit on the Galaxy Nexus).

Yet a lot of manufacturers seem to think that it’s a good idea to make such phones, and Samsung with their Galaxy Note is only one of many. The Galaxy Note, however, is already on the market, as opposed to other devices, so let’s see if Samsung learned anything from Dell’s mistakes and whether the Galaxy Note can actually be successful.

On the outside, the new Galaxy Note looks quite a lot better than the Streak, mostly because it’s a newer phone and Samsung is well known for making some pretty classy designs. The Galaxy Note looks like an oversized Galaxy S2, and with its slim profile, it sits very well in one’s hands – not so much when you’re holding it with one hand, though. The build quality is pretty good, considering its size and the fact that it’s made mostly out of plastic (or so it seems). It’s certainly better than the Streak, that’s for sure.

The display on the Dell Streak was a big 5.0 inch unit with a resolution of 800×480 pixels, as you may remember, and while it was a good unit, it wasn’t anything out of the ordinary. The Galaxy Note uses an even bigger 5.3 inch Super AMOLED screen, which looks simply amazing thanks to the full 1280×800 pixels resolution – yes, it’s the same resolution used in over 50% of all 16:10 format laptops! Needless to say that Samsung made a great move forward with this, and the display alone makes you want to forgive the big size of the smartphone.

The Dell Streak has a decent amount of hardware crammed inside its housing. It has all the features a normal user may need, from Wifi and Bluetooth to GPS, magnetometer and two cameras. But that pales in comparison with the Galaxy Note’s specs – this thing has practically everything: aside from the standard features, you get a 1080p capable camera on the back, an NFC transceiver, support for 21 Mbps download on 4G networks, HDMI out and a big 2500 mAh battery that should last through a full day without needing a recharge. The storage space includes 32 GB of internal memory and a micro SD card slot, which is a welcome surprise for sure. The Note also has an integrated stylus, which is actually pretty useful on this display size.

The performance of the 1 GHz Snapdragon in the Dell Streak was enough at the time, but it’s definitely on the low end of the spectrum nowadays. Samsung seems to understand that people need a future proof device, and the Galaxy Note is proof of that – it sports one of the fastest platforms on the market, Samsung’s own Exynos chipset, running at 1.4 GHz on two cores and using a high performance Mali 400 GPU. Coupled with 1 GB of RAM, it should be more than enough for anything, from video playback to Web browsing and gaming (which is awesome on the big display, by the way).

The Streak’s biggest fault was its outdated OS – at the time it was released, the 1.5 and 1.6 versions were already too old to be useful, and a lot of features that were introduced in the 2.0 and 2.2 versions were simply missing. Of course, Dell did release an update, but it was too late. The Galaxy Note, on the other hand, runs on the latest version of Android Gingerbread and it will be getting an update to Ice Cream Sandwich in the near future, as well. That’s pretty much all the users need.

It seems that Samsung studied the hybrid phones niche quite a lot better than Dell, and no doubt they also learned a lot from the company’s mistakes with the Streak 5 (and 7, for that matter). The Galaxy Note is a much better tablet/phone than the Dell Streak, in every aspect you can think of, and knowing Samsung’s marketing channels, it will no doubt fare much better on the market than the Streak ever could.