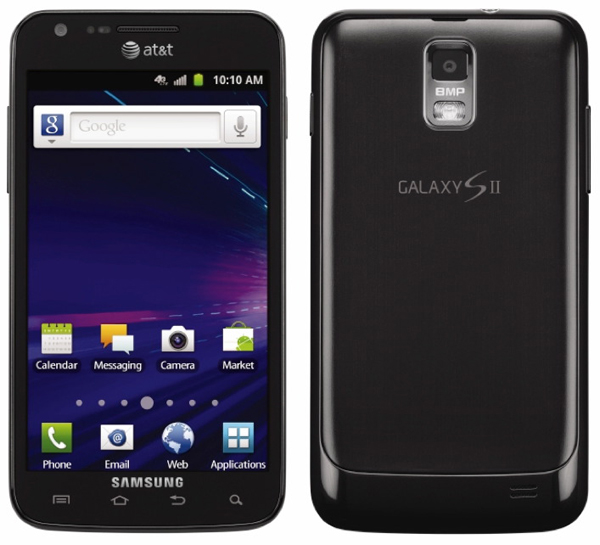 AT&T seems to be set on messing with their customers by releasing newer smartphones that are just slightly improved versions of previous models and not offering a way to easily and cheaply upgrade, instead selling them side by side. The latest in the line is the Samsung Galaxy S2 Skyrocket, which has been on the market for a whole two months, and now it’s already getting an update in the form of the Galaxy S2 Skyrocket HD.

The upcoming smartphone has the same overall design as its predecessor, with a standard slate design, big display on the front and 4 touch navigation buttons, a camera on the back as well as a brushed metal finish cover that is also removable. The only differences from the previous model are the thickness – the Skyrocket HD is slightly thinner at 0.4 inches – and the new 4.65 inch Super AMOLED display, which has a 1280×720 pixels resolution and looks simply amazing – the colors are vivid, the brightness and contrast are excellent and the viewing angles are pretty much perfect, not to mention that being an AMOLED screen makes it very visible in direct sunlight.

Aside from that, the new smartphone is pretty much equal to the first Galaxy S2 Skyrocket. Performance wise, there shouldn’t be any issues, as the 1.5 Ghz dual core Snapdragon that runs inside the device is more than enough to run any apps that you might need. The 1 GB of RAM also guarantees that the phone will be fast and lag-free when running resource intensive apps and multiple apps at the same time, which is especially good since Android 4.0 Ice Cream Sandwich has a more advanced multitasking system.

Interestingly, even though the phone will be coming in the next few months, it will run Android 2.3.5 Gingerbread out of the box, which is surprising – you’d expect it to have Ice Cream Sandwich pre-installed. However, an update to the newest OS version will be coming Over The Air, so it’s not that big of an issue. Obviously, the Skyrocket HD will be using Samsung’s own Touch Wiz interface customizations – whether you like them or not.

The other hardware specs remain the same – there’s the usual Wifi N, Bluetooth, GPS adapters, a pretty wide selection of sensors for all purposes, a micro USB port with HDMI out capabilities, a 3.5 mm audio jack, an NFC radio, and of course the 4G LTE radio, which was also present on the previous model. This should give you more than enough expansion options to let you use the phone for any kinds of tasks. The 1850 mAh battery may not compare with the new Droid RAZR Maxx’s 3300 mAh monster, but it should still be enough to last through a day’s worth of work – standard fare for modern phones.

Overall, the Samsung Galaxy S2 Skyrocket HD for AT&T (wow, that is a long name!) is a very good device on its own, but when you consider that there are several thousand people out there who have an almost identical handset that is now considered old, it’s not a nice move from AT&T. Thankfully (or sadly, depending on which side of the fence you are), the Skyrocket HD won’t be coming for a few months at least, so you still have time to enjoy the Skyrocket as the most high end phone on AT&T’s network.