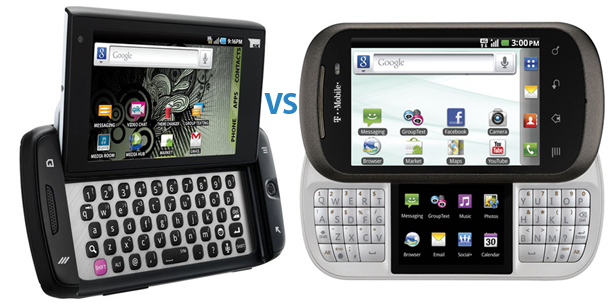 There are quite a few smartphones with a QWERTY keyboard on the market right now, but most of them are nothing special, with the notable exception of the new Droid 3 and Droid 4, which have a wonderful keyboard, and the slightly older T-Mobile G2, which also has a very nice keyboard. All three of them (and most other models, like the Captivate Glide) are general purpose smartphones, and aren’t really intended for writing long texts and emails, even though they’re very good at it.

There is one phone that has always been intended for heavy texters, though – the T-Mobile Sidekick, which has a long history of being the best QWERTY phone on the market, and its latest smartphone reincarnation, the Sidekick 4G, is also perfect for those who write a lot on their phones on the go. The texting uber-machine has a new competitor, though, and it’s not only made for texters, it’s also intended for productivity, as well – the LG DoublePlay has two screens and a split keyboard, which makes multitasking and texting faster and better than ever before. So how do these two phones stack up against each other?

Both the DoublePlay and the Sidekick 4G look quite different from other smartphones with a keyboard. The DoublePlay looks like a usual slider when first (unusually thick for a modern phone, though), but once you open it up, you see the split keyboard and the second touch screen. The Sidekick has the unmistakable screen in the middle design, and when it’s open, it tilts at an angle for a more comfortable user experience. The Sidekick 4G is better built, with a sturdy housing with a metal frame, while the LG feels a bit more plasticy and cheaper. It’s almost as thick as the DoublePlay with its 15 mm, though.

The Sidekick definitely has the better screen, even if it’s only one – at 3.5 inches and 800×480 pixels resolution, it’s a relatively good LCD that can be used for anything from playing games to browsing the Web comfortably and of course, writing lots of text. The DoublePlay also has a 3.5 inch display on the front, but its 320×480 resolution is simply abysmal – it looks pixelated and it’s a pretty weird experience using apps and browsing Web pages on it – while the text is nice and big, there’s not much of it on the screen at the same time, and you need to scroll around like crazy. The second display doesn’t help with that, since it’s meant to display different things, like shortcuts, bookmarks in the browser, or another app (say, messaging). It has a 320×240 pixels on 2 inches of space, which makes its picture a bit better than the main display. An 800×480 pixels unit on the front would’ve been perfect, but alas…

The performance and hardware features are pretty much the same on both phones. The LG DoublePlay uses the MSM8255 Snapdragon, running at 1 GHz, and with its Adreno 205 GPU and 512 MB of RAM it’s enough for most apps on the market, although it’s pretty slow compared to dual core (easily visible when loading Web pages full of content) and will probably not be enough anymore by the end of next year. The Sidekick gets a pardon for that, since it’s been on the market for a year now, but its 1 GHz Hummingbird is not much faster – in fact, the only difference you could see is in games and GPU intensive apps, since the PowerVR SGX540 that Samsung uses is better than the Adreno 205. The amount of RAM is the same at 512 MB.

The storage space is provided by the user with an external micro SD card, so both phones are pretty much the same in that regard. The cameras are different – the Sidekick has a 3.2 Megapixels unit that can only shoot 720×480 pixels video (at least it’s wide screen), while the newer DoublePlay uses a 5 megapixels shooter with support for 720p HD, although the overall quality of video and photos isn’t much different. All the other features are also more or less the same on both devices – you’ve got Wifi, Bluetooth, GPS, a bunch of sensors – what else do you need?

The keyboards are great for typing – that’s a given since both phones are made for that purpose. The Sidekick 4G has a nicely spaced, big landscape keyboard, while the DoublePlay uses the split approach to get to the same comfort level when typing, although you’ll probably have to get used to it first. The display in the middle is great for productivity and multitasking, as it allows you to take notes or make a call while browsing the Web, read and send messages while editing a document or watching a video, and more. That’s very cool and useful, although the usual Android experience is pretty good, too.

Sadly, the Sidekick 4G runs Android 2.2 Froyo and it seems that T-Mobile is not in a hurry to release the Gingerbread update, which is hopefully coming soon. The DoublePlay obviously comes with Gingerbread pre-installed, and it’s a special version, modified by LG to allow for two screens use, so don’t expect to be able to update it yourself. In fact, it will probably be quite buggy at first, as well.

Both of these phones are great for typing, but frankly, the older Sidekick 4G gives you a much better overall experience, although if you want Android Gingerbread and don’t mind the low resolution main display, the DoublePlay is not a bad choice, either. It is going to cost you more, though…