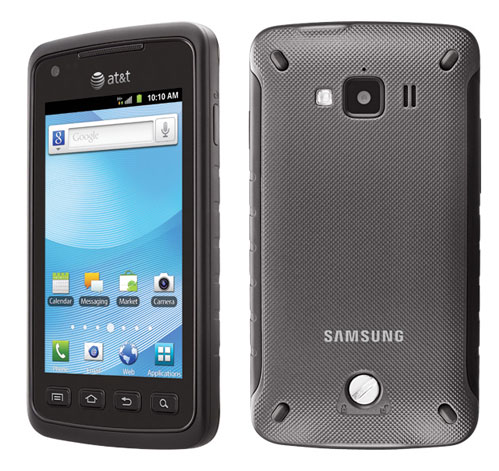 If there is one thing I hate about the US, it’s how they get to have carrier-exclusive phones. Phones not only get their own names with each carrier, they also have variations in design, hardware, and performance. It seems like AT&T is at it again, rubbing a new phone on everyone else’s faces. It’s the Samsung Rugby Smart and it’s not your ordinary smartphone.

Samsung Rugby Smart is exclusive to AT&T subscribers. Specs were announced yesterday prior to its official launching. Like a rugby player the phone is a toughie, built to withstand environmental extremes. It can be submerged in water, buried and dirt, fall to the ground, or have coffee spilled over it. At least that’s what’s shown on the YouTube video posted by ShareATT . AT&T further adds that the phone “meets US Mil-STD 810F for dust, humidity, rain, shock, and temperature” and that it is “waterproof against incidental exposure to water when all parts are tightly closed”.

Sure. Waterproof, dustproof, and shockproof phones have been around since who knows when. But to see them on high-function smartphones like Rugby Smart is really something. Motorola was the first to popularize these three features with Motorola Defy and now they have a new line-up of phones inspired by it – Motorola Defy+ which is on the high-end market and Motorola Defy Mini for users who want a durable alternative for a bargain.

Despite the tough build of the phone, design and functionality aren’t compromised. Specs include a 3.7-inch WVGA Super AMOLED display, 5MP rear camera, 1650 mAh battery, and a built-in flashlight.. It runs on Android Gingerbread 2.3 and has a virtual QWERTY keyboard. Oh, and the phone supports 4G services too.