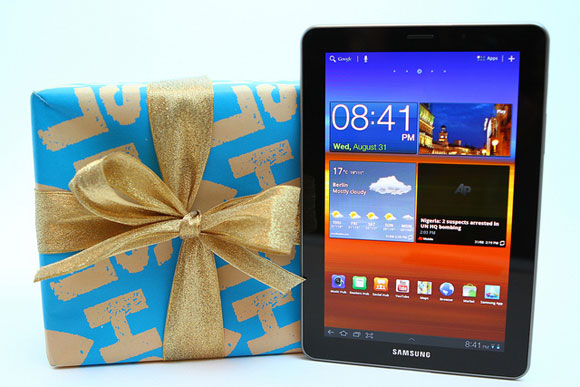 Samsung Galaxy Tab 7.7 was first unveiled at this year’s Consumer Electronics Show (CES). It was touted as the world’s thinnest tablet. It has a 7.7-inch screen featuring the high-definition Super AMOLED Plus display. Pixel density is 1280×800 pixels. Galaxy Tab 7.7 has a 1.4GHz dual-core CPU which hasn’t been specified until now. Behind its thin Verizon-branded slate is a 3.2MP camera with LED flash. Right in front is a 2MP camera for video calls.

Unlike the original Galaxy Tab 10.1, Samsung didn’t forget to add support for external memory with this tablet. It can support a 32GB micro SD card at most. Verizon’s Galaxy Tab 7.7 also has an internal storage of 16GB. It will run Android 3.2 Honeycomb and capable of keeping up with the carrier’s 4G LTE network.

According to Samsung, you can get hold of a Galaxy Tab 7.7 at Verizon Wireless Communication Stores and the carrier’s website beginning March 1. It costs $700 without a contract but if you sign up for the two-year agreement, you only have to pay $500 and an additional $30 per month for 4G connectivity. No details regarding an Ice Cream Sandwich update was given by Samsung or Verizon Wireless.

Honeycomb on Galaxy Tab 7.7 is displeasing. It would’ve been better to see Ice Cream Sandwich on it. Keep your fingers crossed and hope that it receives an update before the year’s end. Other than that, this tablet is a good buy even when compared to iPad 2.