Trending
You are at:Home»Tablet Reviews»Samsung Galaxy Tab 7.7 vs the iPad 2 – the tablet that makes it worth learning Android
By Gadgetman on Sep 29, 2011 · Tablet Reviews 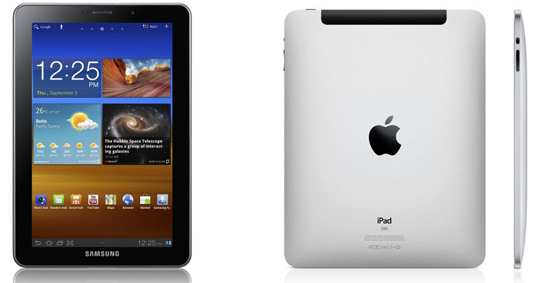 The tablet market has grown at an explosive rate since the first iPad was released and still continues to expand surprisingly fast. Some experts estimate that it will reach the same size as the phone market in 4-5 years, which means that every person who has a cellphone will have a tablet, and for some reason, I don’t doubt that in the slightest.

There have been quite a lot of developments on the tablet market in the past year, with the biggest news being the release of several Android tablets from big companies (starting with the relatively unsuccessful Galaxy Tab), the release of Android 3.0 Honeycomb (which was specifically designed for tablets) and of course, the release of Apple’s iPad 2 and Samsung’s Galaxy Tabs 10.1, 8.9 and 7.7.

The iPad 2 is an amazing device – it’s super slim, it has twice the processing power and RAM of its predecessor, it has two cameras (low resolution, but good enough for snapshots) and overall it’s a great evolution of the first iPad. Now, Samsung’s GT 10.1 and 8.9 can easily take on the iPad 2, which says a lot about them. They are both more powerful and even slimmer than Apple’s tablet, however the Galaxy Tab 7.7 takes the cake in every regard and can easily be considered the current leader on the tablet market, the mythical “iPad killer”, and it makes it worth learning the slightly more complicated Android Honeycomb OS rather than just going for the easy iOS on the iPad 2.

Let’s compare the two devices, and let’s start with the exterior: While the iPad 2 is very slim, sleek looking and solid feeling with its metal construction, the Galaxy Tab 7.7 manages to beat it in almost every aspect. It’s just slightly smaller and feels perfect for use with two or even one hand (reading, for example), it weighs only 335 grams, compared to iPad 2’s 600 grams and it has the same metal frame and back plate with a brushed aluminum finish, which makes it look very stylish and professional.

The biggest and most unique feature on the Galaxy Tab 7.7, however, is its marvelous Super AMOLED Plus display. It’s 7.7 inches across, has a resolution of 1280×800 pixels and it looks simply amazing! If you’ve ever seen the Galaxy S or even better Galaxy S2, you’ll know what everyone is talking about: the colors, contrast, brightness are all at a very high level, and they’re like nothing you’ve seen on any LCD display, including the one on the iPad 2, which looks quite pixelated with its 1024×768 pixels, especially after looking at the pixel-packed 7.7 incher on the new Galaxy Tab. The screen alone will make you think twice before choosing the iPad 2 – it’s just that good.

There’s no surprises under the hood, either: Android tablets have always been one step ahead of the iPad in this regard, and even though the new iPad 2 has a dual core A5 CPU, it’s nowhere near as fast as the 1.4 GHz Exynos that’s running the show in the Galaxy Tab 7.7. I’m not even going to mention the 1 GB of RAM and the four times as fast Mali graphics adapter inside Samsung’s new device… oh wait, I just did! Yes, it’s faster in every regard and no one can deny that.

The other features are pretty much the same, with the notable exception of the bigger cameras on the Galaxy Tab: the one on the back is a 3 megapixels unit (still small compared to other Android tablets, though) and can shoot 720p HD videos, while on the front you have a 2 megapixels camera for video calls and snapshots. Compare that to the petty 0.7 and 0.3 megapixels on the iPad 2.

Price-wise, both devices will cost about the same, although everybody is keeping their hopes up for a cheaper Galaxy Tab 7.7, seeing as the Galaxy Tab 10.1 already costs the same as the iPad 2 (but that’s because of Verizon’s crazy pricing schemes). If you’re moving from the first iPad, you’d be wise to at least take a look at the new Android tablet: the screen, processing power and build quality are worth the minor inconvenience of learning to use Android, which is also much better once you get used to it!