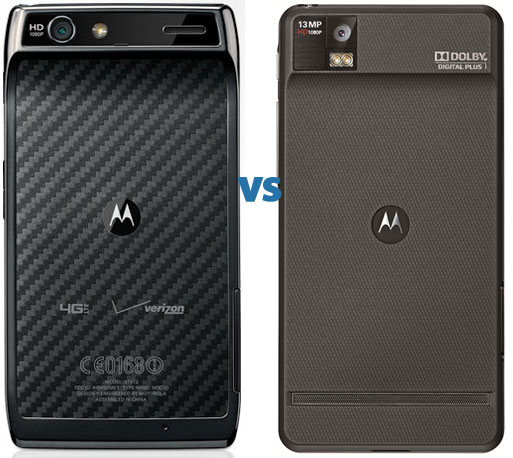 Motorola’s Droid RAZR was an instant hit – it is currently one of the most popular Android smartphones on the market, and it really is the flagship for the OS, with even the Galaxy Nexus being unable to compare in overall design and function. But if we’d have to name one drawback of the phone, it would be the relatively short battery life.

It’s not really that short – it’s pretty average, in fact – but Motorola must’ve thought it’s a big issue, since they released a whole new model that definitely fixed that issue: the Motorola Droid RAZR Maxx, which has a 3300 mAh battery and can last up to 21 hours of continuous work on a 4G LTE network – twice the life of the RAZR!

The weird thing is that Motorola is selling the new smartphone alongside the Droid RAZR, which made a lot of people angry – the Maxx looks more like an upgrade than anything else. If you had to choose between the two, which one would you take? I believe the answer is pretty clear for most people, but here’s a short comparison of the features and design of both the Droid RAZR and RAZR Maxx to help you decide.

The Motorola Droid RAZR Maxx is pretty much a carbon copy of the Droid RAZR, down to the Kevlar fiber on the back. The only difference is that the Droid RAZR Maxx is slightly thicker, but at 9 mm, it is still thinner than most other high end phones, including the HTC Sensation, LG Nitro HD and the iPhone 4S. The Droid RAZR is, of course, a very impressive 7.1 mm thin, but that doesn’t make it any more portable or easy to hold. In fact, of the two, the Maxx sits better in your hand and is more comfortable to use with two hands.

The internal hardware is pretty much the same on both smartphones. Everything from the dual core processor to the amount of storage space onboard is exactly the same. The 4.3 inch Super AMOLED display with a 960×540 pixels resolution remains the same, and it’s simply beautiful – you will be hard pressed to find something wrong with its colors or brightness.

The other hardware features include a separate micro USB and micro HDMI ports, 3.5 mm audio jack, GPS, Wifi N, Bluetooth 3.0, DLNA compatibility, 4G LTE network support, a 1.3 megapixels camera on the front for video calls and a bigger 8 megapixels unit on the back for photos and HD video (1080p Full HD resolution). There are 16 GB of onboard storage space AND a micro SD card slot for expansion on both devices – Motorola certainly hasn’t skimped on this like other manufacturers.

The performance is equal thanks to the TI OMAP 4430 chipset running inside, aided by the updated version of the PowerVR SGX540 graphics adapter and 1024 MB of RAM. That should be plenty enough for any apps and games. The only difference on the inside is the battery – the Droid RAZR has a pretty big 1780 mAh battery, but the RAZR Maxx has almost double the capacity at 3300 mAh – that’s pretty darn impressive, and hopefully other manufactures will continue the trend (users would definitely love that).

The software on both smartphones is also exactly the same: the RAZR and RAZR Maxx come with Android Gingerbread pre-installed, and Motorola promises that the Ice Cream Sandwich update will be available soon. Of course, the company installed their own customizations, the MotoBlur interface, which doesn’t look all that bad, but I personally think that the default Android skin is good enough.

As you can see, the Droid RAZR and RAZR Maxx are pretty much the same handset, with the major difference being that the latter lasts twice or even three times as long (in 3G mode) on a single charge. The extra 1.9 mm of thickness are definitely worth that, and I don’t see why anyone would choose the Droid RAZR over the RAZR Maxx. That seems to be the popular opinion, too. To add insult to injury, Motorola is now offering a developer version of the Droid RAZR (not the RAZR Maxx!) with an unlocked boot loader and no warranty. Still, if you’re not a developer, the RAZR Maxx is the better choice overall, for sure.