Trending
You are at:Home»Gadget Reviews»Panasonic ToughPad A1 vs Pantech Element – is Panasonic’s extra ruggedness worth it?
By Gadgetman on Feb 9, 2012 · Gadget Reviews 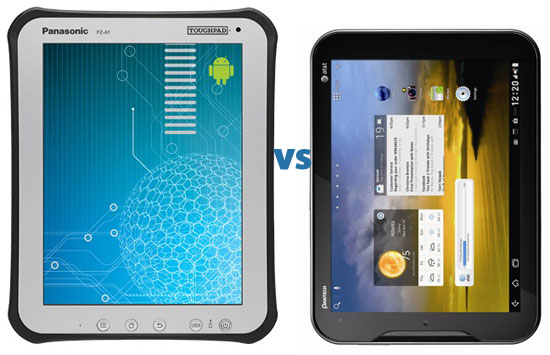 There are a lot of tablets on the market today, but even with over two dozen different low-, mid- and high end models, there’s one niche that hasn’t been getting much attention from the manufacturers – rugged devices. Sure, there have been several announcements of rugged tablets, but none of them became a reality in the end.

However, this year we’re finally going to see a couple of rugged Android tablets hit the market – the Pantech Element and the Panasonic ToughPad A1. These two tablets are quite different in design, but the idea is that they’re rugged enough for any everyday use, so which one is better for the average user?

The Pantech Element is definitely the more normal looking of the two tablets, with a pretty average thickness and weight. The front has only the 8 inch display, while the back cover, which is sealed with rubber inserts to protect against water and dust, has a very nice carbon fiber finish (it’s not texture, just paint, but it looks great). All the ports are also sealed and are pretty well protected.

The Panasonic ToughPad A1, as its name suggests, looks very tough, and has an industrial finish with a lot of exposed screws and visible panels on the back. On the front, you’ll find the 10 inch display and 5 hardware buttons for navigation. On the sides, there’s a thick rubber frame that will protect the tablet from drops, and it extends forward somewhat to protect the display, as well.

Both tablets are scratch, water and dust resistant, and both can take a dive under water without problems, but the ToughPad is more resistant to drops. However, the Element should also withstand a 1-2 feet drop without problems (the Gorilla glass should not crack). Obviously, the Element is the better choice for normal everyday use, even in the field.

The hardware features of both the Panasonic ToughPad A1 and Pantech Element are pretty much the same, with a few minor differences, of course. The A1 has a 10 inch IPS display with a resolution of 1024×768 pixels, which looks and works pretty well – it’s no worse than the iPad’s screen, so you can’t complain. The Element uses a smaller 8 inch IPS display with the same XGA resolution, which makes its picture slightly better thanks to the higher dpi, but the difference is minimal at best and unnoticeable under normal circumstances.

Both tablets also have the usual Wifi N, Bluetooth and GPS radios, as well as a 3.5 mm audio jack, 16 GB of onboard storage space and a micro SD card slot for expansion, as well as a micro USB and micro HDMI ports. Both, The ToughPad and The Element have two cameras: 5 megapixels unit on the back with support for HD video recording and a 2 megapixels one on the front for video calls and HD video chat (over Skype, for example).

The performance of both tablets should be pretty much equal: both of them feature a dual core processor and 1 GB of RAM, although the Element’s 1.5 GHz Qualcomm CPU is a bit faster than the 1.2 GHz Marvell in the ToughPad.

Both tablets will be shipping later this year with Android Honeycomb, and the Pantech Element will have an Ice Cream Sandwich update waiting for an installation over the air. Panasonic hasn’t said anything about that, but they should provide the ICS update, seeing as there are several important features that the new version brings along.

The Panasonic ToughPad A1 is aimed at field workers, the military and doctors, but the high $1299 retail price make it somewhat of a dubious choice (I’m sure the government will like to buy them, though). The Pantech Element has almost the same level of ruggedness (shock protection being the only weakness), and has much more to offer to the average user or even business professionals, field workers, doctors and even soldiers (those who aren’t in an active war zone, at least). The price is also much lower at $500 without a contract, so if you’re looking for a rugged compact tablet, you should check it out.