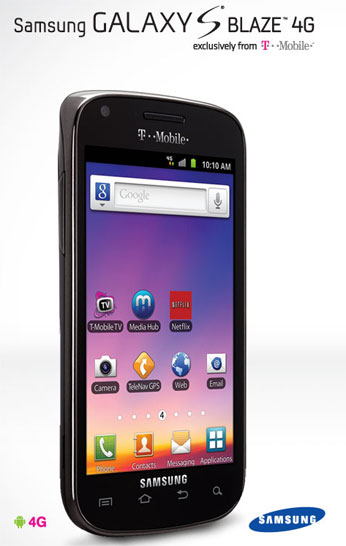 Samsung is preparing for a lot of new releases this year, and they have a lot of competition on the smartphones market, as well, unlike the previous year. Rumors about the Galaxy S3 are going strong, but we’ll have to wait until the special event that the company has scheduled for March to find out the real details behind it.

For now, we’ll have to make do with the handsets Samsung will be announcing at Mobile World Congress. It seems that there will be quite a lot of them, however only one of the phones has had its details leaked ahead of schedule – the Galaxy S Blaze 4G, which is one of the most attractive high end smartphones to hit the market, thanks to the low price and very respectable hardware features.

The design of the Galaxy S Blaze 4G (that is a pretty long name, so let’s just call it Blaze 4G or Blaze) is very similar to Samsung’s other handsets – it’s got the same overall style and look as the Galaxy Nexus and Galaxy S2, combined. On the front, there’s the display and touch navigation buttons – it seems the company is not ready to get rid of them, yet (especially when the phone will be running Gingerbread out of the box). The back has only the removable cover and the camera, and the glossy frame all around is metal to make everything sturdier and more attractive.

The hardware features look great, especially when you factor in the price. The phone has a 4 inch Super AMOLED display – Samsung is really adept at making good displays, and this beauty is no exception. The colors are vivid and the contrast and brightness ratios are very high, as well. You’ll be able to use this phone outdoors without any issues, and the viewing angles are also pretty much perfect. The resolution is the same old 800×480, though, but that doesn’t stop the display from showing a clear and sharp picture, just like the Galaxy S and S2 before it.

The other hardware specs are all pretty standard – you’ve got your usual Wifi N, Bluetooth and GPS adapters, DLNA compatibility, USB and HDMI out capabilities, a slew of sensors necessary for normal operation, a 3.5 mm audio jack and a micro SD card slot for all your memory needs. There’s also a 5 megapixels main camera and a front facing 1.3 megapixels shooter for taking photos and video, and a HSPA+ modem that supports the new 42 Mbps networks (actually achievable only in Europe, sadly).

The performance is also very high for such a cheap phone – there’s a third generation Snapdragon running things inside at 1.5 GHz per core, and with 1024 MB of RAM, you can be sure it will never be lagging or slowing down, even under the heaviest of loads. The Adreno 220 graphics adapter can also compete on equal grounds with the PowerVR and GeForce units in other chipsets, and you’ll be able to run the latest games for a long time.

Interestingly, the Blaze 4G comes with Android 2.3 Gingerbread installed out of the factory – hence the need for external navigation buttons, but I really wonder why do they even bother creating two OS builds, since Ice Cream Sandwich has been available for several months and Samsung has it planned as an OTA update for the Blaze 4G already. The Touch Wiz interface customizations are also present, and they’re just as good as always – sometimes, you just want to go back to the default Android experience, though.

The Samsung Galaxy S Blaze 4G will be officially announced and demonstrated in detail during this year’s MWC in Spain, but we already know the price – it will cost only $150 on T-Mobile (after a $50 mail-in rebate) with a contract, which is a very low price for the specs – there are lower end phones that cost more.