Trending
You are at:Home»Gadget Reviews»Toshiba Excite X10 vs Apple iPad 2 – the similarities make the choice a bit difficult
By Gadgetman on Feb 4, 2012 · Gadget Reviews 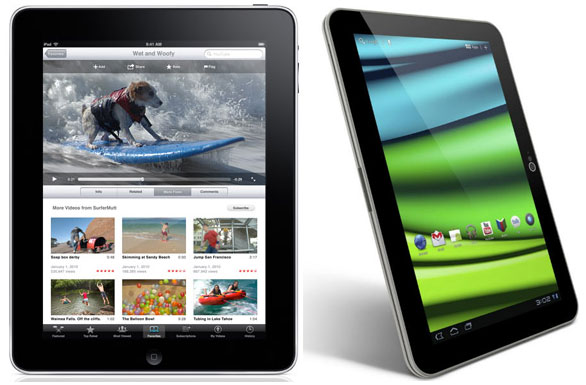 The iPad 2 is still the king on the tablet market, surpassing any other Android tablets in sales and selling more units than even its predecessor, which I have to admit is pretty impressive. But its reign may be coming to an end, with the new generation of Android tablets coming on the market and Android Ice Cream Sandwich being rolled out on most devices.

One of the newest tablets to hit the market is Toshiba’s Excite X10, and it looks like it has the two main things it needs to become a winner: a great design (it’s the thinnest tablet in the world, as well) and powerful internal hardware. I suppose the rest is up to the company’s marketing strategy, but it’s interesting to see it compared to the iPad 2.

Both the iPad 2 and the Excite X10 are made out of metal, and while the iPad 2 does look pretty good with its tapered edges and clean aluminum back cover, the Excite X10 has a more unique design. It has a brushed metal finish on the back with the Toshiba logo in big chrome letters (it looks better than it sounds, believe me), and there’s a groove around the frame that makes it look distinct from any other tablet. The back is also completely flat, which makes it look great on a table thanks to the 7.7 mm thickness. Still, the design is each user’s personal preference, and some might like the iPad better.

The hardware specs of both the Apple iPad 2 and the Toshiba Excite X10 are actually pretty similar. Both tablets have the usual Wifi, Bluetooth and GPS set of adapters, a slew of different sensors needed for normal operation, USB and HDMI out, a 3.5 mm audio jack, as well as two cameras for photos and video calls.

The displays also differ, but not by much – the iPad 2 has a 4:3 format IPS screen with a resolution of 1024×768 pixels, while the Excite X10 uses a 16:10 format wide screen with a 1280×800 pixels resolution. Both displays looks pretty similar, which is to be expected since they’re both IPS, and have comparable color reproduction, contrast, brightness and viewing angles.

The performance should also be higher on the Excite X10, although the actual experience strongly depends on the software as well. Toshiba’s tablet uses a fast 1.2 GHz dual core processor, aided by a full 1024 MB of RAM, which means that it can power through anything and be smooth even when running dozens of apps in the background or having a few dozen tabs open in the browser. The iPad 2 also has a dual core processor, Apple’s own A5, running at a slower 1 GHz and only with 512 MB to back it up. It seems to be more than enough, though, with even iMovie (a video editing app) working perfectly fine.

Obviously, the iPad 2 runs Apple’s own iOS, which is perfect for beginners, but not as good for advanced users who want more control over their device and more customization options. The Excite X10 ships with Android Honeycomb – an excellent mobile OS, but there will be an update available to the new and improved Android 4.0 Ice Cream Sandwich, which is even better. The Android UI is slightly more complicated, but also more flexible and advanced compared to iOS – the apps are comparable, though, but I have to say that iOS apps do look better than their Android counterparts.

Overall, the Toshiba Excite X10 and Apple iPad 2 are pretty similar, however that makes the choice somewhat easier if you’re an advanced user – you should go with the Excite, of course. Android offers more customization options than iOS, but if you don’t care about that, either tablet would do the job just fine.