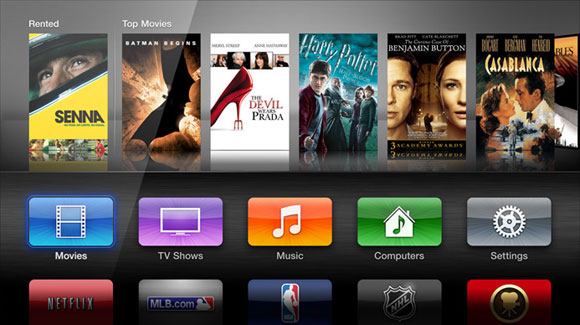 The fresh user interface of Apple TV’s new model features iOS-like buttons. They appear on the home screen underneath the thumbnail images. The buttons act as shortcuts to Apple’s music, TV shows, movies, trailers, podcasts, and the settings menu. Third party services such as Vimeo, Netflix, and subscriptions to live sports are also accessible with these buttons.

1080p HD video support is the most significant upgrade to Apple TV. Before, Apple TV only had support for 720p HD videos. Even though it’s good enough, it doesn’t match the clarity of 1080p videos. To compensate, Apple sold videos through iTunes limited to that resolution. Now that the new Apple TV supports 1080p videos like the new iPad does, Apple opens the doors of iTunes to 1080p videos, movies, and TV shows.

A drawback of 1080p videos is that they could take hours to stream, especially when internet connections are too slow. Apple says you need at least 8Mbps of bandwidth to stream 1080p content at a comfortable pace. The software of the new Apple TV lets users choose to stream content at varied resolutions. With the option to switch to 720p or standard resolutions, people can stream videos at fast rates despite having slow broadband connections.

The ability to stream and redownload TV shows already purchased isn’t new to Apple TV. But it was announced that Apple is adding movies into this list, allowing users to download and stream purchased videos over and over again. Genius technology was also added into its mix of new features, recommending movies based on your previous downloads.

The new Apple TV may have an identical design to the previous model but inside is a more powerful, single-core A5 chip. It may not be as fast as the dual-core A5X found in iPad 3 but it’s a significant improvement to the A4-packing, second generation Apple TV. The new model will sell for $99 which is the same price as before. It will be available on March 16, the same date that the new iPad starts shipping.