Trending
You are at:Home»Gadget Reviews»New iPad vs Asus Transformer Prime – A5X and Tegra 3 benchmarked
By Gadgetman on Mar 20, 2012 · Gadget Reviews 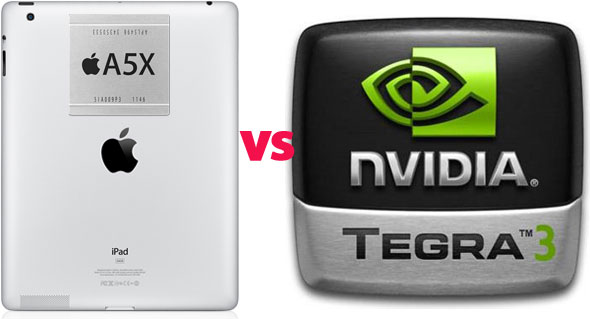 iFixit isn’t the only one tearing down the new iPad into bits and pieces of hardware. So is Chipworks. In this latest tear down, they gave us a few details which the iFixit team missed – a larger A5X chip and a confirmation that it was made by Samsung. The experts behind Chipworks say it is 35% larger than the A5 chip to accommodate the new quad-core GPU, which according to Phil Schiller of Apple offers 4 times better graphics performance than Tegra 3. Laptop Mag tested the two processors against each other to validate Apple’s claims.

Laptop Mag used a benchmarking software to measure the performance of the new iPad and its A5X processor in comparison to Asus Transformer Prime and its Tegra 3 chip. To avoid discrepancies in the results, they used a benchmarking tool that was available for both iOS and Android platforms. The software compares their Open GL 3D performance which basically translates to the “graphics performance” that Schiller was talking about in his keynote. Laptop Mag even went as far as comparing the two processors’ overall performance, which is unfair on the part of A5X since it’s a dual-core processor.

During the graphically intense phase of the benchmarking test, A5X beats Tegra 3 as it offers twice as many frames per second. What this means is that you get smoother 3D graphics with the new iPad than with Asus Transformer Prime. This test proves that A5X does offer a better graphics performance than Tegra 3 except that it’s just two times faster, not four times. The A5X also scores better in read and write speeds, another surprising find by the folks at Laptop Mag. All other performance tests prove that Tegra 3 is still the better contender. Among those tested were their gaming, integer and floating point, and memory performances.

The real shocking development here is that there’s some truth to Paul Schiller’s claim. A5X does offer better graphics performance except that it’s only twice as much and not four times as he said. It’s also interesting to know that A5X is quicker at writing and reading data on memory, taking into consideration that it’s a dual-core CPU pitted against the quad-core Tegra 3. But all other results showing Tegra 3 as the better processor was unnecessary since there’s no contest between the two. In terms of overall performance, it would’ve been more interesting to see the new iPad tested against dual-core tablets from the Android family.