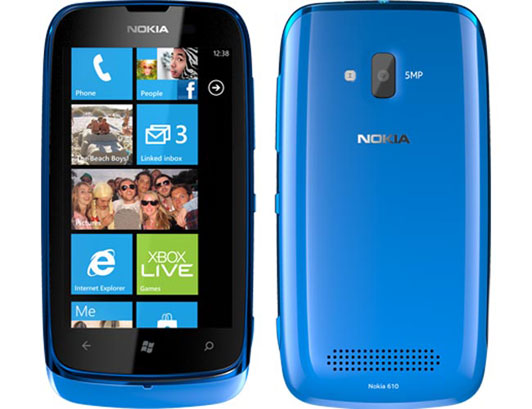 Nokia Lumia 610 was announced at this year’s Mobile World Congress. It was overshadowed by Pureview 808, a 41MP Symbian smartphone announced by Nokia on the same day. Lumia 610 is a Windows Phone made to be affordable. With its hip colors and pocket-friendly design, it is a sure hit among teens and adults who want to be introduced to Windows’ mobile platform.

Lumia 610 takes on a slim, candy bar form factor. Overall, it is smaller and thinner than Lumia 710 which is more expensive by the way. It has a curved design with a plastic body and metallic edge – looks like Blackberry from the sides if you ask me. Unlike Lumia 710 which has an anti-fingerprint matte finish, this one doesn’t. It easily gets smudged but you should be able to prevent that by placing a case on its back.
While it belongs to the low-end market, Nokia Lumia 610 doesn’t look cheap. Its metallic edge saved it from such branding. Available colors include white, black, magenta, and blue.

It has a slightly larger screen size than iPhones with its 3.7-inch display. The screen has WVGA LCD resolution (800×480 pixels) which may not be visible under sunlight. Indoors, the display is vivid though.

Running on Windows 7.5 Mango, Nokia says the mobile platform was specifically designed by Microsoft on less-powerful devices such as this one. Its processor is clocked at only 800 MHz, a battery capacity of 1300 mAh, and a 5MP Camera. Besides these, other key specs are: