Trending
You are at:Home»Smartphone Reviews»Nokia Lumia 900 vs Apple iPhone 4S – which one should you go with if you want a powerful, yet easy to use phone?
By Gadgetman on Mar 6, 2012 · Smartphone Reviews 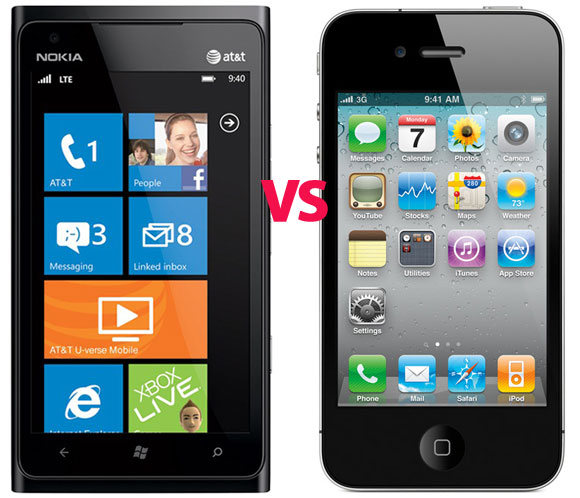 iOS and Android are currently at a tie for the most popular operating system in the mobile world. But if you want a simple to use OS that doesn’t require you do any manual configuration or mess around with the settings, then iOS is pretty much your only choice. Or at least it was, until Microsoft’s Windows Phone 7 launched, after years of promises and delays.

Windows Phone 7 is a really great OS, and it’s getting better all the time. The Mango update has solved most of the issues that plagued the first version, and the next Tango update will make it even better. The Metro UI interface is very unique and the whole OS experience is similar to iOS in that you don’t have to set up anything and the interface is dead simple and intuitive to use.

At the moment, the best iOS smartphone is the iPhone 4S, and even when the iPhone 5 comes out, it’ll still be a great purchase. On the Windows Phone 7 side, the new Nokia 900 is the current top of the line device, so if you want to get a phone that is easy to use out of the box and doesn’t need you to mess with any settings, these are the two handsets you should focus on.

The design of the iPhone 4S and Nokia Lumia 900 is very different. Whereas the iPhone has a metal frame sandwiched between two pieces of Gorilla glass, which gives it a very nice and classy look, the Lumia 900 uses a unibody polycarbonate (basically strong plastic) housing with a Gorilla glass sheet covering the display and most of the front, giving it a modern and very unique feel. Both phones are very sturdy and won’t flex at all, so the construction quality is pretty much equal, even if it was achieved through different means.

The Nokia Lumia 900 is one of the few devices to actually be slower than the iPhone 4S when it comes to processor performance. Its 1.4 GHz single core processor can’t compare to the dual core 1 GHz CPU in the iPhone 4S when it comes to benchmarks. However, the overall experience in menus and apps is pretty much the same on both phones – after all, iOS can’t really fully use the dual core CPU. Both devices also feature a similar graphics adapter, and the performance and graphics quality in games is very similar – iOS was always good with 3D, and it’s pretty much a given that an OS bearing the Windows name would be, too (Windows Phone 7 has DirectX and Shader Model 3 support, too).

The other hardware features are very similar on both the iPhone 4S and Lumia 900, although there are a couple of differences. Both phones have the usual Wifi, Bluetooth, GPS and sensors stack, but the Lumia 900 has a 4G LTE radio, while the iPhone 4S has video out capabilities – in my opinion, the latter is more useful. Both phones also have an 8 megapixels main camera and a smaller front facing camera for video chat.

You already know about the iPhone 4S’ 3.5 inch “Retina Display” – indeed, it looks great with its 960×640 pixels. The Lumia 900 may have a bigger display at 4.3 inches, but the 800×480 pixels resolution make it a bit worse than the iPhone’s, even though it’s an AMOLED unit and uses Nokia’s patented ClearBlack technology.

As you can see, the iPhone 4S and Lumia 900 are very similar when it comes to hardware and software, and their pricing is also pretty much the same.

If you want a phone that’s easy and intuitive to use, but don’t want to get the iPhone for any reason, the Nokia Lumia 900 is a perfect alternative – Windows Phone 7 is much simpler than Android and yet it’s very sleek and has pretty much all of the popular apps that other platforms have – there’s no reason not to go with it.