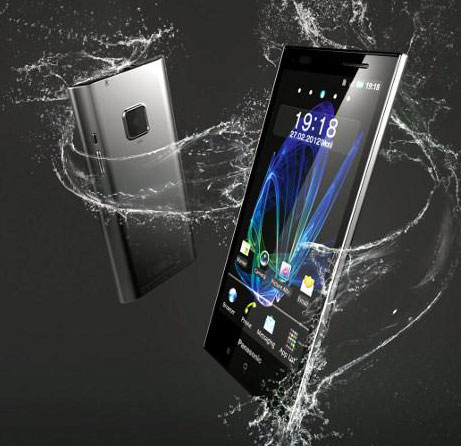 Panasonic is making a comeback on the mobile market, and their devices are actually pretty damn attractive. The company is betting on style, not hardware features or performance, although their new handset duo certainly has everything included. The ELUGA is a nice and relatively compact all-rounder, while the ELUGA Power is arguably more interesting – it’s a direct competitor to the Samsung Galaxy Note, and it’s interesting to see how it will do, with the same specs and more style.

The design of the ELUGA Power is pretty much the same as its smaller brother, although the single piece surrounding the sides and the back is gone in favor of a more traditional construction. The sides are bathed in chrome, while the top, bottom and sides are matte titanium colored. The front is covered with a big sheet of protective glass that covers the display and the definitely visible speaker grill, camera and light sensor at the top.

What’s most impressive though is that the ELUGA Power, just like the ELUGA, is water and dust proof, as well as scratch resistant – here’s another candidate for those days on the beach or phone calls in heavy rain. Another defining feature of the ELUGA Power is the 70 mm width – considering that there’s a 5 inch display inside, that’s pretty impressive (for comparison, the Galaxy Note has a 83 mm width). The phone definitely sits well in your hand – much better than you’d expect at a first glance.

The Panasonic ELUGA Power packs in all the hardware features that a modern smartphone should have. There’s everything from Wifi N, Bluetooth 3.0 and GPS to HDMI and USB ports, 3.5 mm audio jack and of course, an NFC radio. Aside from the camera on the front, there’s also an 8 megapixels unit on the back with support for 1080p video recording and just as is the case with the ELUGA, no LED flash (although the space is there, making the decision that much weirder).

The display you see when you power on the phone is a 5 inch LCD unit with a 1280×720 pixels resolution and as I noted above, very narrow bezel on the sides (the top and bottom bezel is also pretty narrow). It’s a decent screen – the colors are great, the brightness is also good, and of course the picture is very clear and sharp, but the viewing angles and sunlight visibility could use some improvement.

The ELUGA Power may not have a quad core Tegra 3 underneath, but with Qualcomm’s Snapdragon S4 it definitely does not lack in performance – you’ll be able to run pretty much all of the apps you can think of and then some. There’s also 1 GB of RAM to keep things smooth no matter what, and the integrated Adreno 225 graphics adapter can provide some impressive FPS for any games – you’ll enjoy Shadowgun on the big display, that’s for sure – and if it’s not enough, you can output it to a bigger screen using the HDMI port!

The ELUGA Power is running Android Ice Cream Sandwich from the get go, and that is actually good news for those who buy the ELUGA – it means that Panasonic will probably release an update for their Gingerbread handsets. The ELUGA Power uses a sort of custom UI from Panasonic – the changes are pretty subtle, I don’t know why they’re even there.

The ELUGA Power will be coming to Europe first, but that’s everything we know about it so far – hopefully, the company will announce the release date and pricing soon. Until then, I can only speculate that it will cost around $250-300 with a contract, seeing as it is a high end device with all the features you may need, which can easily rival the Samsung Galaxy Note while being more of a smartphone than a tablet.