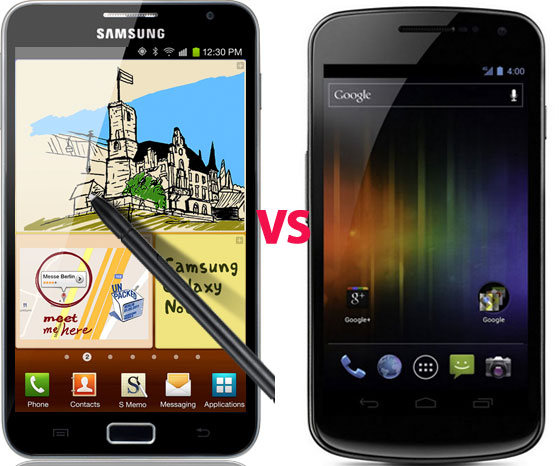 Samsung has released quite a lot of devices this year already, and they’re undoubtedly the top Android smartphone manufacturers, with the Galaxy S series of handsets having sold more units than all of the other competing phones combined. Despite the fact that their phones aren’t usually of the highest build quality, they always look great and have something unique to offer to a potential user.

Two of the latest smartphones the company released were the Galaxy Note – a smartphone/tablet hybrid with a big 5 inch display – and the Galaxy Nexus – the official Google smartphone, and the first device to showcase the new Android 4.0 Ice Cream Sandwich operating system. Despite them being very similar when it comes to the hardware specs, it’s interesting to compare them to see just which one makes for a better purchase if you want one of the most powerful smartphones on the market in your pocket.

While the design of the Galaxy Note and Nexus is quite different, you can definitely see the same overall Samsung style in both of them. The Galaxy Note reminds more of Samsung’s other Galaxy devices, like the Galaxy S and S2, while the Galaxy Nexus looks a lot like its predecessor, the Nexus S (which was also made by Samsung), complete with the curved display glass on the front.

The build quality is very similar – there’s no flex anywhere, however the flimsy removable battery cover on the Nexus makes it feel a bit cheaper. Obviously, the Note is quite a lot bigger, and while it’s much more comfortable for actual use, it doesn’t fit in a lot of pockets – the Nexus is better in that regard. But if you have large pockets, the Note will give you a better experience with Web browsing, playing games and watching videos, taking notes and just about anything else you do on a smartphone.

The Samsung Galaxy Note and Galaxy Nexus are quite similar when it comes to the hardware, as I’ve already noted. While the general performance of both devices is pretty much the same in everyday use and most applications, the Note will win in a benchmark fight thanks to its 1.5 GHz dual core Exynos chipset, which also features a quad core graphics adapter for the best graphics performance. The Nexus has a slightly slower TI OMAP 4460 platform running at 1.2 GHz and featuring the PowerVR SGX540 graphics solution. Both smartphones have a full gigabyte of RAM on the inside, which helps keep things smooth no matter how many apps you’ve got running at the same time.

The other hardware features are pretty much the same as you’ll find on most other smartphones. Besides the usual Wifi N, Bluetooth and GPS adapters, both the Galaxy Note and Galaxy Nexus have 16 GB of onboard storage space (the Note also comes in a 32 GB version), USB and HDMI out ports, a slew of various sensors, NFC radio and a HSDPA+ modem for speeds of up to 21 Mbps download and 5.76 Mbps upload. There is a difference in imaging capabilities – the Nexus has a 5 megapixels camera on the back with support for 720p video recording and a 1.3 megapixels unit on the front, while the Note uses a couple of 8 and 2 megapixels cameras (with the latter supporting 1080p video recording).

The displays on both devices are amazing – Samsung really knows how to make great OLED panels. Both the Galaxy Note and Nexus use a Super AMOLED display with a 1280×800 resolution, and the colors, contrast and brightness are top of the line on both of them. Obviously, the Nexus has a higher pixel density owing to the 4.65 inches in size, but the picture is very sharp and clear on the Note’s 5.3 inch screen, as well.

The Nexus had the advantage when it first came out at the end of 2011, but right now, with the Note receiving an Ice Cream Sandwich update, both smartphones are pretty much the same when it comes to the software. Samsung’s Touch Wiz is present only on the Note, though, as are the special apps to be used for note taking with the stylus (they’re not that great, though – you’re not missing anything by going with the Nexus).

Both the Samsung Galaxy Note and Galaxy Nexus cost about the same, but provide a different experience in everyday use – the Note’s bigger display is better for work and play, but the Nexus is a lot more portable, and the 4.65 inch display is still good enough for anything you’d want to use it for – the choice is pretty difficult, indeed.