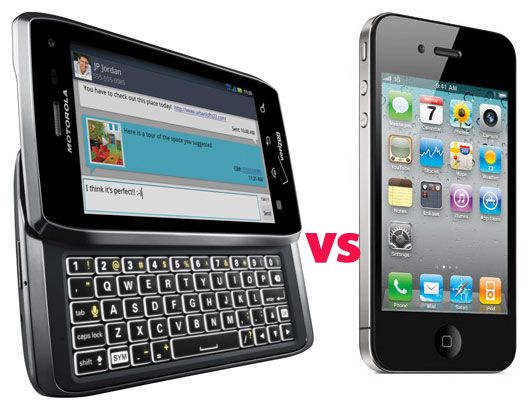 The iPhone 4S is the best smartphone Apple has to offer, and while it pales in comparison to the newest Android smartphones to hit the market, it’s still plenty good enough for most people – nobody actually needs a quad core processor in daily use, although the bigger displays are quite useful.

But if you need a versatile smartphone to be used for work and play, something with a QWERTY keyboard and a big display would make a better choice, and Motorola’s Droid is the best when it comes to the former feature. The Droid 4 is the latest in series, and being priced at the same level as the iPhone 4S, it’s interesting to see how they stack up.

We all know the iPhone 4S’ design by now – a metal frame sandwiched between two Gorilla glass panels, with a slim profile and attractive design. The Droid 4 is quite different – it borrows some cues from the Droid RAZR, but it comes nowhere close to the attractiveness and style of either the RAZR or the 4S. Furthermore, unlike its predecessor, the Droid 3, the new Droid has an all plastic housing – to reduce the weight, according to Motorola – but it really feels cheaper, although the sturdiness and thinness are not affected.

The hardware features are very similar on both the Droid 4 and iPhone 4S, and you can see the full list below. The only major differences are the bigger battery on the Droid 4, which is necessary to balance the increased power consumption on 4G LTE and… that’s pretty much it! Of course, you’ve got the marvelous QWERTY keyboard on the Droid 4 – the best one yet, I should say, but if you don’t need it, then it’s a moot point.

The other differences lie in performance – the Droid 4 should be marginally better in overall performance, thanks to the 1.2 GHz dual core processor and 1024 MB of RAM, while the iPhone 4S should win in gaming performance with its dual core GPU (the Droid 4 has the same PowerVR, only single core).

The Droid 4 comes with Android 2.3.6 pre-installed, but an update to the latest Ice Cream Sandwich is available already – the same goes for the iPhone 4S, which can be updated to iOS 5.1. The iPhone 4S has Siri, which is very impressive and can be real helpful sometimes, but the Droid 4 also has voice actions, and Google is saying that they have something similar or better than Siri in store for Android. 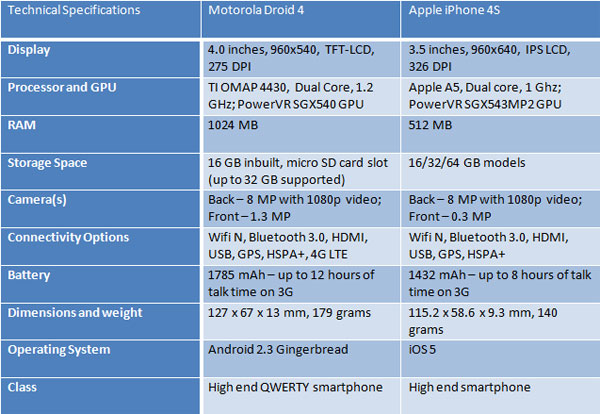 Both the iPhone 4S and Droid 4 are available on sale right now, for similar pricing – if I had to choose, I’d go with the Droid 4, but only because of the more flexible and customizable OS and the awesome QWERTY keyboard – if that’s not an issue for you, the iPhone 4S has a better design and is just as good hardware wise, plus it will have a better resale value when the iPhone 5 is released this fall.