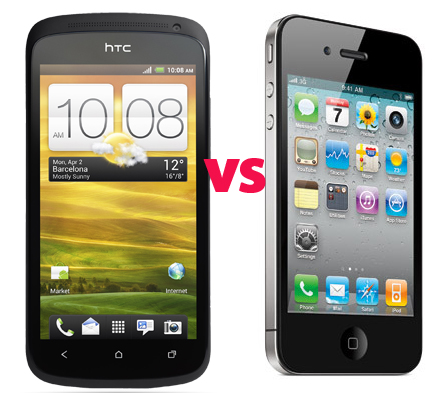 Apple’s iPhone 4S is still one of the most popular smartphones on the market – and it’s the phone with the most sales in the US, but the onslaught of Android handsets never stops and the latest models are far better when it comes to performance, although they’ve been a bit behind when it comes to style.

Well, HTC’s latest smartphone aims to change that – the One S is a slim, sleek and very attractive handset that can easily rival the iPhone 4S in beauty, as well as hardware features. It may very well be the better choice if you’re looking for a very stylish phone that will be “in” even a couple of years from now.

We all know and love the iPhone 4S’ design – its metal frame sandwiched between two pieces of Gorilla glass is still one of the most unique designs to hit the market, and that’s what makes it so valued among users who want style in their pocket.

HTC One S comes with its own unique build – it has a unibody all-aluminum housing with a Gorilla glass sheet covering the front, and one little detail worthy of attention: the body has been treated with a special high-voltage process that turns the outer layer of the aluminum into an attractive matte ceramic-like surface that is very scratch resistant and which looks unique (and no, there is no paint or any kind of finish on it – that’s how the treated metal looks).

You’ll definitely like the premium feel and frankly, at this point, the HTC One S is the better choice if you want something really unique (since pretty much everyone has an iPhone 4 or 4S by now).

When it comes to hardware features, both the iPhone 4S and the One S (pardon the pun) are very similar – both have the same set of radios and cameras, with the main difference being in the processor, amount of RAM and storage space. As you can see from the table below, the iPhone 4S comes in three different versions, which is great if you need more than the 16 GB that the HTC One S offers (and there’s no micro SD card slot for expansion, either).

The performance of the One S is better in pretty much any apps if you compare the raw speed – its new Snapdragon S4 and Adreno 225 processor and graphics adapter combo can rival the new quad core Tegra 3 – something that cannot be said about the 1 GHz dual core processor and dual core SGX543 in the iPhone 4S. However, the difference is barely noticeable in everyday apps and the SGX543MP2 is still more than enough for even the newest games. 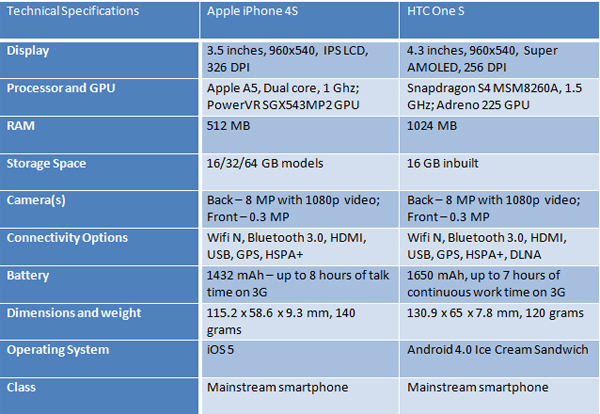 The iPhone 4S has been on the market for quite some time now, and the HTC One S has just been released, so you can find either phone relatively easily. Both phones are great if you want some style in your pocket, but at this point I’d say the One S is a better choice if you want something more unique and also high performance – that is, if you’re not afraid of the slightly steeper learning curve of Android 4.0 (which will definitely pay off in the long run).