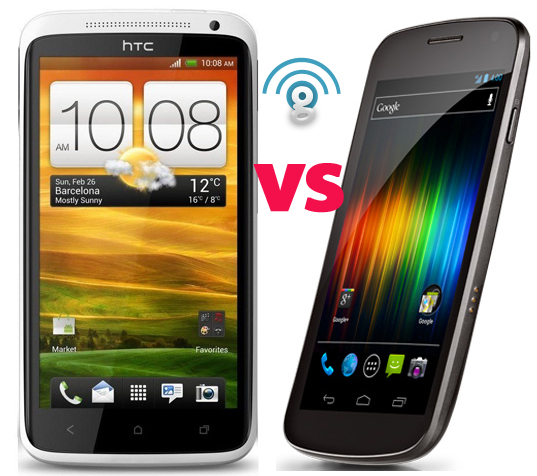 The Samsung Galaxy Nexus (well, technically it’s just the Galaxy Nexus) is one of the best Android smartphones you can buy right now. It was released in October 2011, and was the first device to officially run Android 4.0 Ice Cream Sandwich, which is pretty much the best mobile OS at the moment.

But the competitors aren’t sleeping, and after a year of releasing a bunch of mediocre devices and losing money, HTC seems to finally be back on track. Their new flagship, the One X, is one of the best smartphones announced this year, and it’s a direct competitor to the Galaxy Nexus. The HTC One X will hit the stores in May, and if you’re deciding between it and the Galaxy Nexus, here’s a short comparison of the two.

The One X and Galaxy Nexus are pretty close when it comes to design and build quality – both have the same rounded edges and back, although the Galaxy Nexus has a curved display, which looks and feels quite nice. Both phones are made out of plastics mostly on the outside, with a nice sturdy metal frame – that’s not going to be a problem since both are pretty sturdy, with the front being covered by a scratch resistant glass. As you can see from the specs table below, both phones also have the same thickness.

Hardware features wise, the One X is a better choice, unless you really like the AMOLED display on the Galaxy Nexus. Sure it is nice, but the IPS Super LCD on the One X is just as good (it has the same resolution, too), and has more natural colors. The other specs are remarkably similar – everything the Galaxy Nexus has, the One X can match, and it also beats it in camera quality and processing power.

The camera in the One X uses HTC’s new ImageSense technology, with a larger lens, backlit sensor and a dedicated image processor that lets you shoot HD video and photos at high resolutions very fast – the auto focus and snap waiting is almost eliminated!

The Tegra 3 inside the One X with the new 12-core GeForce GPU is also much faster than the good old TI OMAP 4460 + single core PowerVR SGX540 combo in the Galaxy Nexus. While you won’t see that much of a difference in everyday use, you’ll definitely like the faster and smoother games, Web browser and other intensive applications.

And here’s why the HTC One X is the better choice if you’re a power user or developer (which are the main demographic of the Galaxy Nexus): HTC offers a free and easy to use unlock tool that lets you unlock your boot loader, bringing the One X to the same level as the Galaxy Nexus in terms of freedom – you can install custom ROMs and tinker with the software/hardware however you want, without having to jump through any hoops. The Android 4.0 with HTC Sense is also pretty nice, although you can easily install a vanilla version of Android. 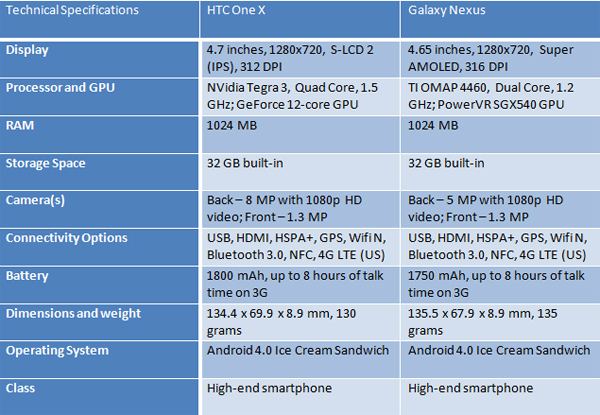 Obviously, the One X isn’t out yet, but with a May release date, it’s pretty close, and the price will most likely be close to that of the Galaxy Nexus. HTC has done a great job making a flagship Android phone with the One X, and if you wanted to get the most powerful phone that you could tinker with however you want, the One X is at the same level as the Galaxy Nexus – I’d say it’s a no brainer which one to buy, but it’s up to you to decide!