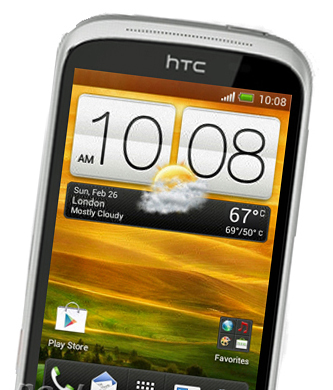 Handsets like Samsung Galaxy Pocket and LG Optimus Elite have led us to believe that entry-level phones will always be of the same caliber. Most, if not many, have the least of everything including RAM, processing speed, internal storage, and cameras. HTC continues to set themselves apart in this category though by releasing entry-level smartphones with some midrange specs. Today, a press shot of a phone belonging to this category emerged. The HTC phone has no final branding but was codenamed HTC Golf.

We first heard about HTC Golf when a test photo leaked online. Data from the photo revealed some of the phone’s specs. For starters, the camera used was a 3-megapixel shooter. This pretty much explains the budget phone branding of HTC Golf. Further analysis of the photo’s EXIF data point to 512MB RAM, 4GB internal storage, microSD card support, a single-core sub-gigahertz processor, and a 3.5-inch screen. Standard radios and sensors were also found in it.

Other rumors dig deeper into the specs of this mystery device, saying it will have a front-facing camera, Bluetooth 3.0, 802.11 b/g/n WiFi, and Beats Audio technology – though, you shouldn’t expect a Beats Audio headset in the light of recent events. Lastly, HTC is rumored to be throwing in a free two-year access to 25GB of Dropbox storage which they continue to do for buyers of HTC One X, S, and V.

Assuming the aforementioned specs are truly packed into HTC Golf, it may be included in the HTC One series as the most budget-friendly option. HTC One V currently holds this spot and sells for $300 off-contract with its 3.7-inch screen, 512MB RAM, a 1GHz single-core processor, and a 5-megapixel rear shooter. If we look at the leaked press shot, HTC Golf does look like it follows the design concept of HTC’s One series. But there’s also a rumor that it will instead be marketed as Wildfire C.

While HTC Golf doesn’t seem like a phone we would go crazy about, a new addition to their existing line entails more options for consumers. And it doesn’t really matter if HTC adds Golf into their One series or Wildfire series of smartphones. Given its specs and the pricing of HTC One V, it will clearly sell for less than $300 – now that’s good news. The press photo is also an sign of its upcoming announcement and release, rumored to be sometime around this second quarter. Are you excited about HTC Golf or would you still prefer HTC One V for a budget Android phone?