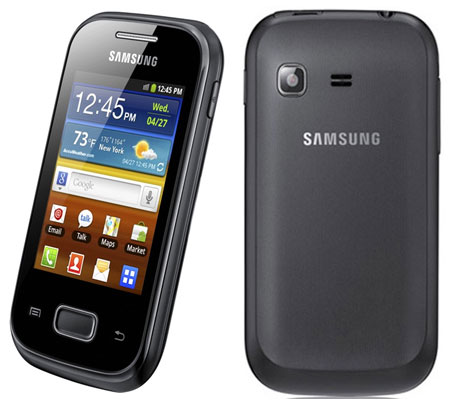 Samsung Galaxy Pocket received FCC approval today and we know what that means – it could be on its way to the US. There’s no official word from Samsung but FCC certification is usually a good sign. Specifications further reveal the possibility of Galaxy Pocket arriving in AT&T if it does launch in the US. I have to tell you though, you can’t expect much from it. But I also think it would make a perfect crash course to Android and the capability of smartphones if you’re on a tight budget.

As its name suggests, Galaxy Pocket is designed to easily fit into your pocket; even the front pocket of your collared shirt. Holding it with one hand might feel awkward at first given its cute size but its curved corners make it comfortable to hold nonetheless. The edge around the phone is accented by metal just like other Galaxy phones. The bottom panel of the screen has a physical home button and two touch-sensitive buttons while its sides are marked by volume controls, the power button, and a 3.5mm jack.

The small size alone gives it away as a budget phone. We can’t judge that by its appearance or materials used since Samsung phones all look the same. These days, the size of a smartphone tell how expensive (or cheap) a phone is.

Samsung Galaxy Pocket runs Android 2.3 Gingerbread and has TouchWiz UX as its user interface. UX is the latest TouchWiz UI for Samsung phones. It has a 2.8-inch display with 240 x 320 screen resolution. Pixel density is 143 ppi which makes things readable enough though never as crisp as AMOLED display. At 97 grams, this phone is very light and might just give you that mini heart attack when you thought it’s missing from your pocket.

For a very small phone, Galaxy Pocket packs a powerful 832MHz. It may be single core but it helps make the phone fast and slick. Last year’s Galaxy Ace had a 3.5-inch screen with the same CPU speed and it was laggy. RAM is unknown but 500MB should be enough for a smooth multitasking experience.

Anything less than 256MB of RAM would spell doom for its multitasking feature. The phone has 2G/3G connectivity as well as Bluetooth, Wi-Fi, GPS, and Wi-Fi tethering. Here’s a list of other known specs and features of Samsung Galaxy Pocket:

Samsung Galaxy Pocket isn’t for everyone. Screen size and limited access to apps might ward you off from ever getting this phone. But those who are leaning towards getting their first smartphone should make it an option. Its specs and features are common across most smartphones – notably Androids.

Like any smartphone, it will open you to a world of entertainment and improve how you connect to friends and family. But because it’s a budget phone, it could help make things easier for you to decide.