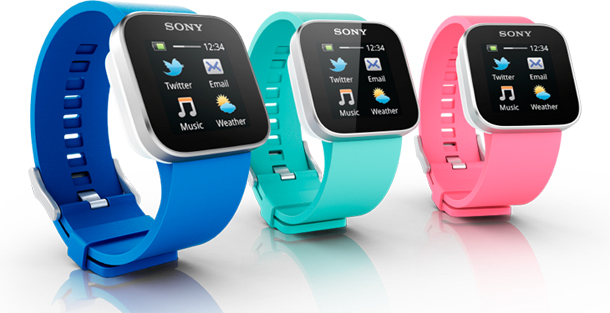 Sony announced the first accessory to their “Smart Extras” line – SmartWatch. SmartWatch is well, a smartwatch that does more than tell time. It is not so much in the league of Motorola MOTOACTV but is more like Allerta’s Pebble launched in yesterday’s Kickstarter. Sony SmartWatch is available for pre-order starting today and will ship on May 4.

SmartWatch has a 1.3” OLED display with 128 x 128 pixels and 65k colors. Though small, the screen shows clear text and an overall vivid display. It is made of aluminum and high-polished plastic, built to be dust- and water-resistant. SmartWatch can last three to four days on regular use but it could go up to 14 days on standby. The watch itself weighs only 15.5g and is 0.3mm thick, giving you that “barely there” feeling.

The best feature of Sony SmartWatch is its ability to check your Android phone for messages, missed calls, and Facebook or Twitter updates without having to scour your bag or pocket for the phone. Notifications can be set on display or vibrate mode. You can also use SmartWatch to control music on your phone: press play, skip a track, or forward to the next song. Apps can be installed from Google Play in addition to the pre-installed applications and widgets.

Sony SmartWatch is selling for $149.99 and currently available for pre-order at Sony Store Online. The package includes a black wristband but you can get a white, blue, pink, grey, or mint-colored wristband separately. Also in the box is a watchband adapter and USB cable for charging, and a user guide too. Compatibility is unfortunately limited to Sony smartphones namely Xperia Arc, Xperia Arc S, Xperia Neo V, and Sony Ericsson Xperia Mini Pro, Xperia Pro, and Xperia Play 4G. Pebble, on the other hand, is compatible to both iOS and Android smartphones.