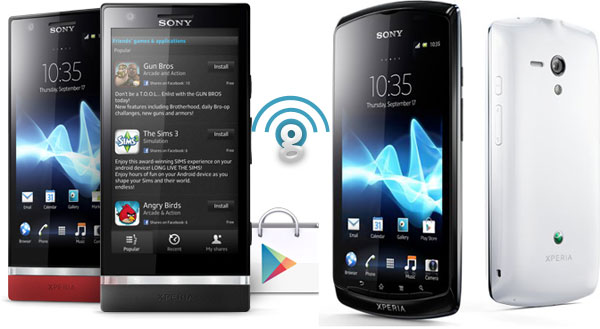 After having bought out Ericsson’s shares of the joint smartphone company, Sony has been pretty active on the market, having announced the Xperia Ion and S high end smartphones under the new brand name, with a new stylish design and a pretty good set of features. Just a week ago, the company has announced yet another couple of smartphones – this time they’re models that the average buyer can afford – the Xperia P and Xperia neo L.

The two smartphones look different from each other, with the Xperia P being part of Sony’s NXT series, and the neo L taking design cues straight from the Sony Ericsson generation – both of them look very nice, though. The Xperia P has the same squared off design as the Xperia S and Ion, with a slightly less premium feel to it because of the plastic components, but it’s still sturdy enough to withstand any kind of use. The Xperia neo L on the other hand, looks like the Sony Ericsson Xperia Neo, and it shares a lot of hardware features with it, as well. It’s made out of plastic on the outside, with a metal frame inside, and it feels just as durable as the Xperia P.

You can see the full hardware specs listed in the table below, but suffice to say that the Xperia P and Xperia neo L aren’t lacking when it comes to them. For a mid-range smartphone, the Xperia P has all the features that you see on high end phones, while the neo L is only missing HDMI out capability and perhaps needs a faster processor. Another special feature found on the Xperia P is Bravia Mobile-powered Reality display with WhiteMagic technology – sounds like a mouthful, but it actually makes the picture more colorful and brighter outdoors thanks to some clever color vibrance settings and a fourth white LED in addition to the standard RGB set.

The performance of the Xperia P is not as high as all the new quad core and fast dual core phones, but its dual core STE NovaThor U8500 chipset is perfectly fine for pretty much any tasks. The processor cores run at 1 GHz, while the Mali 400 GPU is still one of the Top 3 graphics adapters for smartphones – in fact, the only thing faster is a quad core version of it and the new 12 core GeForce in the Tegra 3.

Interestingly, the Xperia P is still powered by Android 2.3.7 Gingerbread, although there is an Ice Cream Sandwich update in the works. The Xperia neo L comes with Android 4.0 pre-installed, making it one of the first Sony phones to have that. Both phones still use Sony’s Timescape UI, which makes them look and feel pretty much the same. 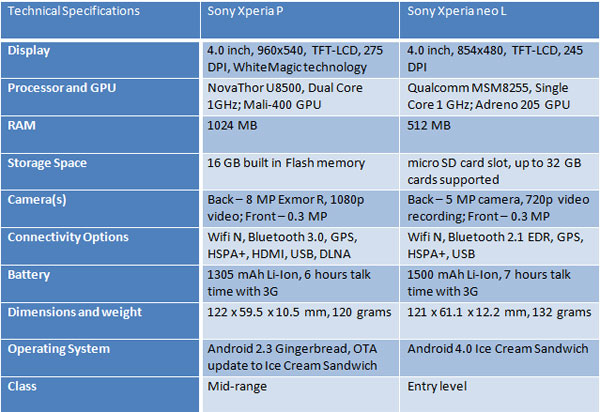 The pricing for both devices is as-of-yet unrevealed, but seeing as the Xperia P is marketed as a mid-range smartphone and the neo L is an entry-level device, they should be priced accordingly and be affordable to most people. The Xperia P should be arriving in Europe and US, while the Xperia neo L is headed only for China – too bad, but then again western countries still have the very similar Sony Ericsson Xperia neo.