Trending
You are at:Home»Gadget Reviews»3D printing – what is it and why you should start paying attention to it now
By Gadgetman on May 4, 2012 · Gadget Reviews 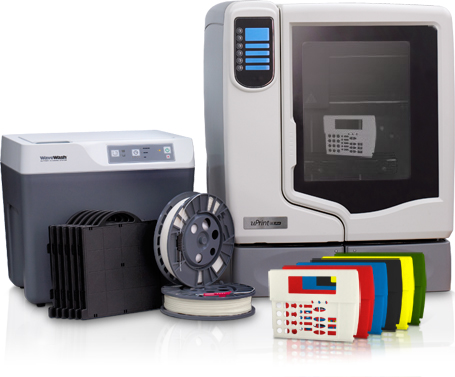 3D printing has been in the news a lot lately, and that’s because the technology is finally maturing and is ready for real world applications. If you don’t know what 3D printing is, I’ll explain it in this article – you should definitely pay attention to it, as it’s the wave of the future – it brings along an amazing number of possibilities that can radically change the way most industries work.

Just as the name says, 3D printing is basically the ability to print in 3 dimensions – just as normal printers print in 2 dimensions on paper, so do 3D printers create tridimensional objects. The implications of that are enormous – being able to print almost anything you want in the comfort of your home or office brings huge advantages to anyone.

While 3D printers are mostly used by companies and individuals for work and rapid prototyping of products that will later be put into mass production, 3D printing can also be used to create one off custom items that will be unique in the world (unless someone copies your design). At the moment, you could easily create various accessories for phones, computers and cars, custom thumb drives, jewelry and decorative items, desktop stands, or even custom parts for laptops and computer towers if you wish.

Creating something to be printed in 3D does require you to be proficient at 3D design and CAD programs – it’s not as easy as taking a picture and sending it to the printer. However, once you learn to use these applications, it can be very fun to print your own stuff.

There are already several 3D printers on the market: the most advanced ones are made by 3D Systems – their ProJet series use SLS technology (basically, they use toner-like dust and melt/fuse it together using high power lasers) and can be used to print almost anything in very high detail and quality.

But you don’t have to spend over $10,000 on such a machine: luckily, there are cheaper alternatives that let you get started with 3D printing right away. If you have some cash and will be printing a lot of things, you can buy one of the compact, open source 3D printers – the best one at the moment is MakerBot, which uses injection molding to print objects made out of ABS plastic (a perfect material for most things) in high detail.

If you just want to print something once in a while, Shapeways.com is the way to go – this service has been around for a while now and you can use it to print objects made of plastic, metal (they even have silver!) and ceramics at pretty affordable prices.

Whether you want to create a custom desktop stand for your smartphone, a bracelet to turn your iPod Nano into a smart watch (a very popular project!), a custom part for your desktop tower or in-car entertainment system or anything else, 3D printing is one of the best ways to do it. You don’t have to wait until somebody else has released a product if you have the will to do it yourself – just design it (with help from the many communities on the Web) and print it!