Trending
You are at:Home»Gadget Reviews»Asus P8Z77-V Premium, the first Thunderbolt motherboard – hardware and features
By Gadgetman on May 22, 2012 · Gadget Reviews 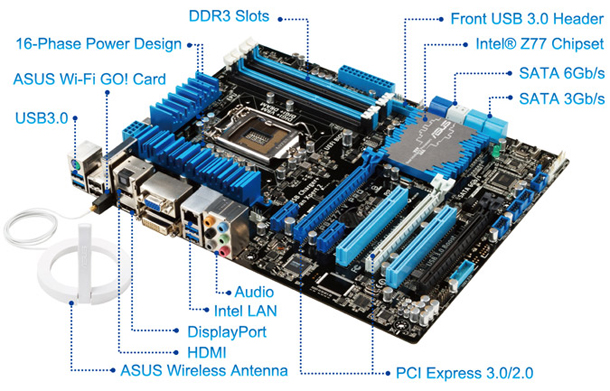 Thunderbolt is the next-generation I/O interface that significantly boosts file transfer rates. With transfer rates of up to 10 Gbps, Intel says that it can transfer a full-length HD movie in less than 30 secs. Compare that to USB 2.0 and it is generations ahead in both read and write speeds. Asus today announced P8Z77-V Premium, a mainboard that supports the exact same high-speed interface. It is the first Intel-certified motherboard with Thunderbolt.

Thunderbolt is said to be two times faster than USB 3.0 and 20 times faster than USB 2.0 which remains to be the most widely used I/O technology across most devices. Each Thunderbolt port is capable of reading and writing 10 Gbps and up to six compatible devices can be connected to Asus P8Z77-V Premium. Fully display support with a monitor equipped with either DisplayPort or Thunderbolt is also made possible by a seventh port. But you won’t be limited to Thunderbolt with P8Z77-V Premium because it also includes half a dozen USB 2.0 and five USB 3.0 ports.

One feature of Asus P8Z77-V is multiple SSD caching for installing multiple SSDs without restrictions on capacity. The same feature also allows installation of different HDD/SDD combinations for optimum performance. The onboard 32GB mSATA SSD enables fast boot times and reduces resume times coming from sleep or hibernate. Smart DIGI+ technology boosts performance speeds by up to 85 percent but can also reduce CPU wattage at the same time, cutting it in half.

These are but a few of the many cool features of Asus P8Z77-V Premium. Other functions include real-time network bandwidth control, USB BIOS flashback, and faster USB 3.0 Transmission with UASP. The motherboard also supports ASUS Crystal Sound for an improved audio experience.