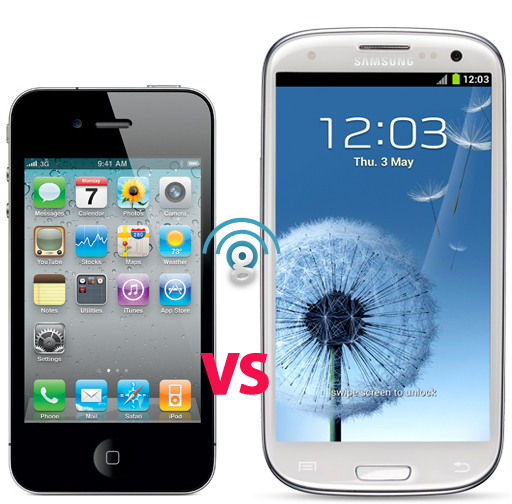 As you may know, Apple’s iPhone 4 and iPhone 4S were the kings of the smartphone world for quite a long time – even though they lack in hardware features and power, they are more than good enough when it comes to actual real world usage. The combination of hardware, software and design is very hard to beat, but now, Samsung seems to have done it – their new Galaxy S3 smartphone definitely beats the iPhone 4S on all three counts.

The iPhone 4S is an attractive smartphone, that’s for sure. But seriously, it looks pretty bad when put on the same desk as the Galaxy S3 – Samsung’s new flagship makes the 4S look old and ugly. That did not happen with the Galaxy S2, which was still an impressive phone, but the S3 manages to beat just about every other phone when it comes to the design. It’s got sleek, rounded lines all around, with a big display with narrow bezels on the front and a clean, glossy back cover. The only drawback is that it’s made mostly out of plastic, but the glaze finish on the back and Gorilla glass on the front will keep it scratch free, plus it’s not like the phone is creaking and falling apart when you hold it, either.

As you can see from the table above, the Galaxy S3 beats the iPhone 4S on just about every point spec-for-spec. It has a better, bigger display (which makes the iPhone 4S’ own screen look tiny and bland), a faster processor and graphics adapter, more storage space, a bigger battery (which is also upgradeable thanks to the removable back cover), more connectivity options (Bluetooth 4.0 means it has the aptX codec – finally, wireless audio will sound as high-fidelity as it does through cables), and most importantly, more software features.

Samsung really put a lot of thought in the software part of the phone – I guess they finally realized the reason why the iPhone is so popular and how the software can make or break any device for the average user. The Galaxy S3 has a very nice feature set, working perfectly out of the box. The interface is sleek and smooth, Touch Wiz 5.0 looks much better now, live panels give the home screen a sense of life, the nature inspired effects are great, Wifi Direct and AllShare (DLNA) are just as good as AirPlay and compatible with more devices, and the Smart features are a pleasure to use. There’s also everything that Android 4.0 offers, including Beam, Face Unlock, On-Device Encryption and more. The only thing that they did not get quite right is S Voice – it works quite well, but you can’t help but feel that it’s just a Siri clone.

The iPhone 4S is already on the market, and it will be around for another year or so as the second model in the lineup when the iPhone 5 is released. Samsung’s Galaxy S3 will be released at the end of spring, and with the pricing being similar for both phones, it definitely makes more sense to get the S3 than the 4S, unless you really can’t find a slightly larger pocket or have very small hands.