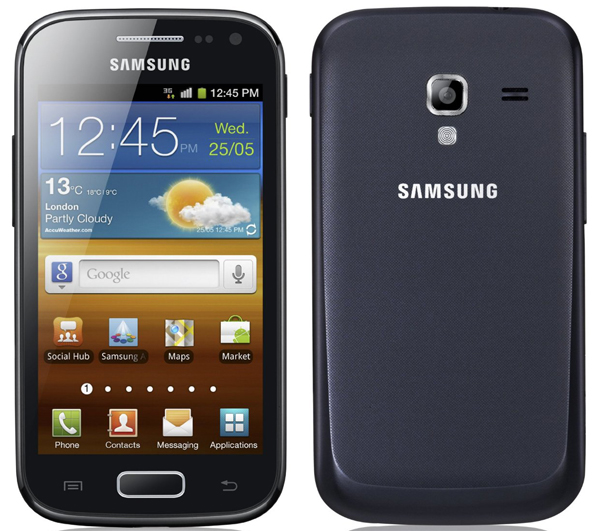 Samsung Galaxy Ace was one of those phones that made people fall in love with Android and for an affordable price too. The midrange handset competed with the likes of HTC Wildfire S and LG Optimus One but they didn’t stand a chance against its more powerful hardware, not to mention more stunning design – even though it looked a lot like an iPhone. Samsung decided to follow it up by releasing Galaxy Ace 2.

Samsung Galaxy Ace 2 no longer has the iPhone-like look of its predecessor. It gains more curves on the sides giving it an oval rather than a rectangular form. The home button located below the display is thinner and again, curvier than before. The silver plate surrounding the edges is no longer as prominent and the back gets a slight curve for improved grip. It’s not as thin as the newly launched Galaxy S3 but it is 1mm thinner than Ace. It’s taller, wider, and heavier but only because it has a larger display and bigger battery.

The phone feels less solid now and it’s not just because of the plastic back cover since last year’s release also had one. Samsung’s choice to reduce the once-wide metal rim came at this expense. In summary, all we can say is that it’s a pocket-friendly phone and something that you can easily grip with one hand.

The larger display of Samsung Galaxy Ace 2 is easy to spot. It now has a 3.8-inch screen coming from 3.5 inches. Screen resolution is noticeably shaper too and leaps to 800 x 480 pixels and 246 ppi. Images and text projected on screen are crisper than usual. Internal storage and RAM should no longer worry you with the 2012 release as it now has 4GB of onboard memory and 768MB RAM. Because of these you can install more apps on phone memory and benefit from a slicker user interface. Data speeds are faster with Samsung Galaxy Ace 2 and it gains Bluetooth 3.0 with A2DP and Wi-Fi Direct feature.

The 5-megapixel rear camera remains unchanged – it still has autofocus and LED flash. But unlike Galaxy Ace it can now record 720p videos at 30fps. You can rely on the microSD slot for expandable storage of up to 32GB, just in case you need more space than the 4GB onboard storage. Processing power is by far the biggest upgrade that Samsung Galaxy Ace 2 received. It now has a dual-core 800MHz processor. Before, it had a single-core CPU. The smartphone also features quad-core graphics with the new MALI-400 GPU. Android 2.3 Gingerbread is preloaded to the phone but is non-upgradeable to Ice Cream Sandwich. Android’s latest firmware version requires at least 1GB of RAM – something that Galaxy Ace 2 doesn’t have.

Samsung Galaxy Ace 2 isn’t as handsome as its older brother so you can’t expect it to turn heads. But it sure packs a lot of power for a midrange phone. If you want a smartphone with decent specs minus the steep price, it’s a great choice.