Trending
You are at:Home»Laptop Reviews»Samsung gets into the convertible Ultrabook game with the Series 5 Ultra Convertible
By Gadgetman on Jul 3, 2012 · Laptop Reviews 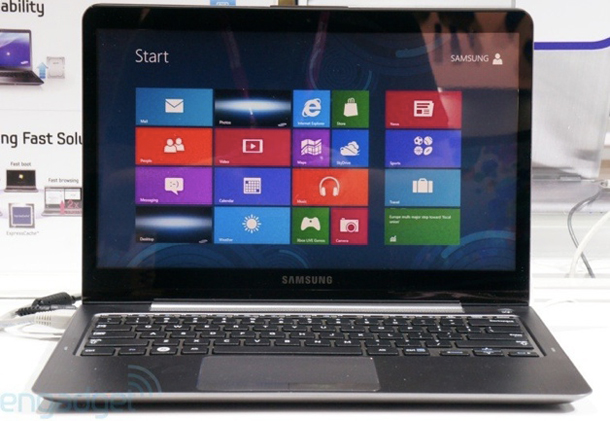 Samsung is undoubtedly the king of the smartphone world, having sold more smartphones than any other company, including Apple, although together with the latter, they control 55% of the market and a whole 90% of the profits. More than half of all Android phones are Samsung’s, which speaks a lot about their impressive production capabilities.

But the company is not satisfied with smartphones alone. They’ve been pretty successful in the laptop market, and were the first to announce an Android tablet back in the day, and now that Windows 8 is upon us, they’re moving forward with Ultrabooks and slates running the new powerful and touch friendly x86 OS from Microsoft. One of their more interesting new announcements is the Series 5 Ultra Convertible – a slim and light Ultrabook that can convert into a big tablet.

One of the first things that come to mind when you see the Series 5 Ultra Convertible is the IdeaPad Yoga – indeed, the device is very similar, if not an outright copy of Lenovo’s unique convertible, which was announced quite a while ago and is still pending release (Windows 8 seems to be the only thing holding it back). Looks like Samsung was impressed by the design, and they’re definitely not ones to be afraid of taking an idea and improving on it (just look at the Galaxy Note, which was also a copy of the much-less successful Dell Streak).

Unlike the Note, the Series 5 Ultra Convertible looks like a cheap imitation of the real deal instead of an improved version. The device is well-built, but the design is not that well thought-out. The brushed aluminum palm rest lacks a good grip (unlike the leather-like surface of the Yoga) and the keyboard is less sunk in, making it more susceptible to damage. The main piece has a tapered finish, making it a bit uncomfortable to use the device as a tablet.

As a last drawback, the 14 inch display is just a 1366×768 TFT LCD that just screams cheap, and looks especially unflattering with the glass digitizer right above it (which has great multi-touch support, by the way). The IdeaPad Yoga’s IPS LCD with 1600×900 pixels is much better.

The other specs are fortunately just as good as any other Ultrabook’s – the laptop is powered by a Core i7 ULV CPU with the Intel HD Graphics 4000 graphics adapter, has 4 GB of RAM and a 500 GB hard drive that is paired with a 24 GB SSD cache for the best possible performance.

Obviously, the touch screen and Windows 8 is the centerpiece of the Series 5 Ultra Convertible, and of course, the new OS delivers on its promises. As long as you stay in the new Metro UI, the experience is smooth, fast and easy. The desktop mode is not as good, but at least it’s there for any legacy software you might need to run.

There’s no word on the availability or price of the Samsung Series 5 Ultra Convertible at the moment, but you can expect it to hit the shelves by the end of summer, at about the same time Windows 8 will be released to OEM manufacturers (the retail version should follow soon after, just like it was the case with Windows 7). The price will undoubtedly be higher than most other Ultrabooks or tablets, and if it’s similar to the IdeaPad Yoga’s, I can see Samsung losing in this niche.