Trending
You are at:Home»Tablet Reviews»Lenovo IdeaPad Yoga – bringing a new twist to the old convertible tablet format
By Gadgetman on Feb 2, 2012 · Tablet Reviews 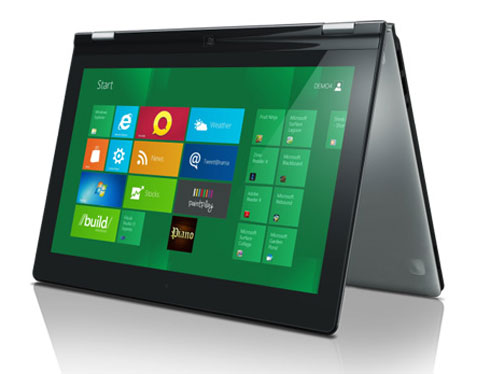 Lenovo had quite a few good products at CES 2012, but among all the consumer tablets and smartphones and business-oriented ThinkPad laptops, the IdeaPad Yoga definitely stood out the most. This device is no simple Ultrabook – it is a convertible, which means it can be used both as a laptop and tablet, but the way it transforms between the two modes is a bit different than all the previous swivel-screen convertibles we’ve seen.

The Yoga uses a 180 degrees hinge to make the tablet transformation possible, and indeed, it looks quite weird – but it’s actually a great design, which makes the whole laptop sturdier and with less parts that can break. In the tablet mode, the keyboard is on the back of the device, but you can’t accidentally press the keys because they’re far enough from the edge, sunk into the housing and of course, disabled. In its normal mode, the IdeaPad Yoga looks no different than any other Ultrabook, making for a great way to surprise someone, I guess.

The build quality of the IdeaPad Yoga is great – it’s made mostly out of metal, like most other Ultrabooks, and the palm rest is covered with a thin leather layer that feels nice to the touch and doubles as a rubber feet replacement, so the device doesn’t scratch or slip off your lap when in tablet mode. At 16.9mm, the Yoga is pretty thin, but at 1.47 kg, it’s definitely a bit heavy for a tablet. The hardware features and performance are totally worth it, though.

The 13.3 inch display is a very nice IPS unit with a resolution of 1600×900 pixels – it beats the MacBook Air’s screen, for sure, and the digitizer supports 10-point multitouch. The only drawback is that it’s glossy, but then again, most displays are nowadays.

On the inside, you’ve got some very powerful hardware that will surely come in handy when working with some intensive apps like Photoshop or even After Effects. The processor will be one of Intel’s next generation Ivy Bridge chips (not confirmed, but it’ll likely be an i5 or i7, or both), and it will be flanked by 8 GB of RAM and a 128 or 256 GB SSD – that should provide more than enough processing power for any everyday apps, plus the Ivy Bridge chips will be using less power than current Sandy Bridge ULVs.

Obviously, the tablet would be nothing without a good OS, and the new Windows 8 does not disappoint – the Metro UI interface has transitioned quite well to bigger displays, and all the power and flexibility of the full x86 Windows is still there – you can run any software that you’re used to, as well as the new Windows 8 Metro apps. What’s even more interesting is the release date – Lenovo promises to have the device shipped “later this year”, so it’s pretty much confirmed that Windows 8 will launch by fall (Microsoft themselves hinted at October-November, but the OS could arrive earlier to computer manufacturers).

The IdeaPad Yoga will cost around $1500 – more than your usual tablet (which are getting cheaper every month), but still within acceptable limits for an Ultrabook, especially one with such an unique feature.