Trending
You are at:Home»Laptop Reviews»Asus Taichi – after the Padfone, it’s time for a tablet-Ultrabook crossover
By Gadgetman on Sep 12, 2012 · Laptop Reviews 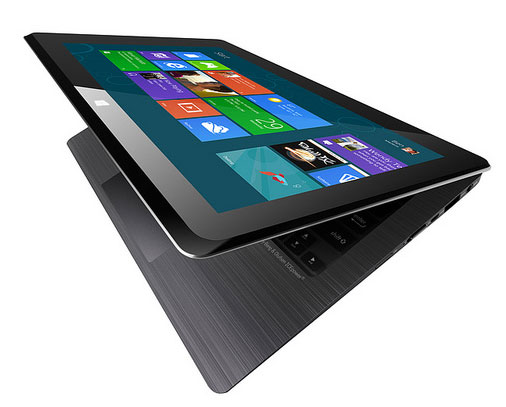 If there’s one company in the world that can create some truly wacky or even downright crazy computer designs, it would be Asus. They’ve long been known for making some of the most unusual laptops (remember the models with a small external display?) and tablets (EEE Pad Slider and the Transformer) and just recently, they’ve stepped up the game on the mobile market.

One of their latest directions is hybrid devices, and after releasing the weird Padfone, they’ve decided to play around with Ultrabook/tablets, as well. The result is Asus TAICHI – definitely one of the most unique (probably needlessly so) Ultrabooks we’ve seen so far.

The Taichi looks like it was inspired by Lenovo’s IdeaPad Yoga, but somewhere along the way, things went horribly wrong. OK, maybe not horribly, but it takes quite a train wreck of a thought to arrive to the conclusion that two displays will look great on an Ultrabook. Two displays on opposite sides of the lid, that is. I’ll admit that it makes the device look pretty cool and there’s some merit to the idea – you can share what you see on the screen with two people and use the Ultrabook as a tablet, as well.

However the disadvantages outweigh the advantages – the Taichi’s dual display configuration uses a lot of power and adds quite a lot of heft to the device, not to mention the price increase. The rest of the hybrid is well built, and even though it’s top heavy, it won’t tumble under normal use, but you can’t help but wonder why they didn’t just use a swivel design like so many convertible laptops did for the past decade – it would’ve been the first convertible Ultrabook, too.

Well, regardless of the impractical design, the hardware features the Asus Taichi offers are quite nice. The Taichi is supposed to come in two models: a dual 13.3 inch and dual 11.6 inch versions (both using an awesome 1920×1080 IPS display), and both of them pack the same firepower under the hood. The Taichis will have a Core i5 or i7 processor with integrated HD 4000 Graphics, 4 GB of DDR3 RAM, a 128 GB SSD drive, as well as two cameras, two USB 3.0 ports, micro HDMI and DisplayPort out, Wifi N and Bluetooth – seemingly the best of both worlds, with the notable exception of a GPS and HSPA radios. Not bad for an Ultrabook and not bad for a tablet, although the full feature set has yet to be confirmed.

The Taichi is probably the only device that is simply perfect for Microsoft’s Windows 8 OS – their alternating personalities go hand in hand with each other, and you could easily use the Metro UI (yeah, the name is here to stay no matter what Microsoft says 🙂 on the outer touch screen and the usual desktop on the internal display in laptop mode. The rest of the software is up to the user, and it should be noted that you’ll now have the Windows 8 Apps Marketplace to get the latest Metro apps from.

There’s no word on the price or availability yet – in fact, some people say that the tablet may never see the market. However, judging by Asus’ previous crazy product ideas, it will most likely be released, probably by the end of the year, but being a Windows 8 device with two displays (expensive Full HD IPS displays, at that) is bound to make it pretty expensive – I guess we’ll wait and see.